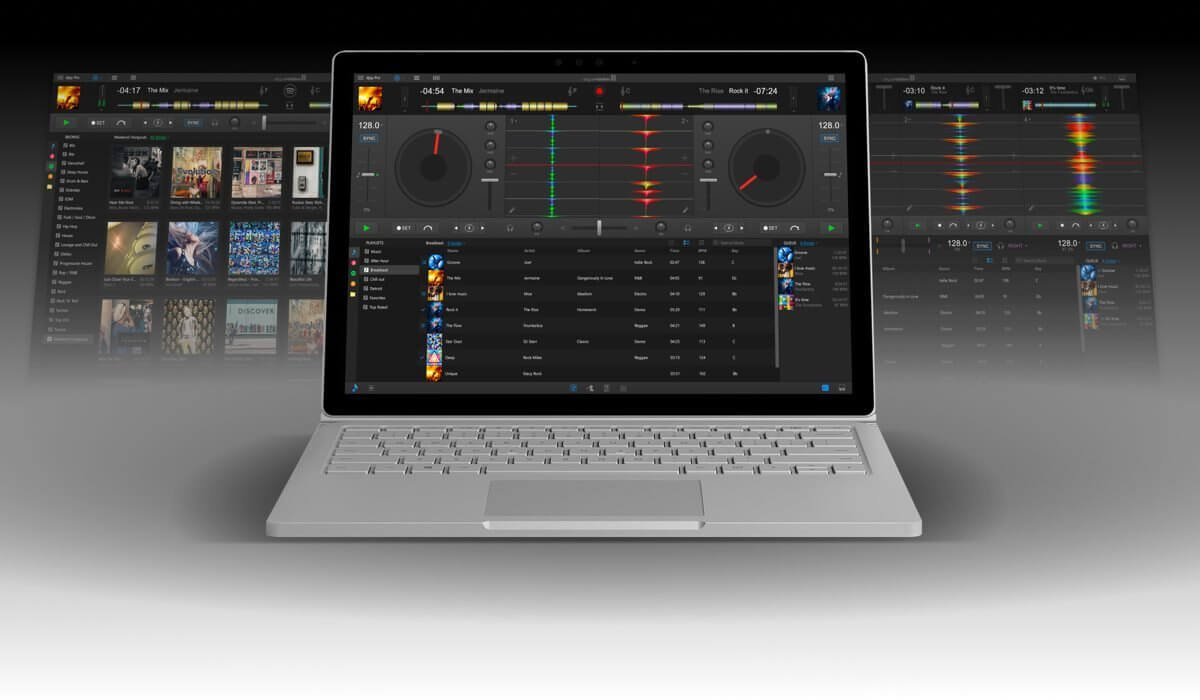 Today Algoriddim released their first ever piece of DJ software for the Windows platform, djay Pro for Windows 10.

Algoriddim has always focussed on IOS and Mac in the past, with the exception of making Android versions of their IOS apps djay and djay Pro. This time, however, djay Pro gets a Windows makeover and will work on any Windows 10 compatible laptop.

This is really a vote of confidence for the Windows platform and its recent evolution. Once buggy and unreliable, Windows has become rock solid and (at least in my experience) and more and more capable of running demanding software. I do all my video editing mid-range Asus laptop (i5 processor, 8 GB of ram, 128 SSD HD) and while it’s not the fastest experience possible, it pretty much does the trick. Kudos to Algoriddim for going Windows as it opens up djay Pro to a range of users that couldn’t run the software before. And while I own a Mac and like it a lot, I wouldn’t go near those new Macbook Pro’s even if my life depended on it.

djay Pro for Windows is feature rich from the start. Lifted from the press release:

djay Pro is built from the ground up as a native Windows 10 app using the Universal Windows Platform (UWP). By leveraging this modern foundation, users will be able to install the app through the Windows Store with a single click, requiring no additional setup. It can seamlessly leverage all available input methods such as keyboard, mouse, touch, pen, MIDI controllers, and the new Surface Dial to give the best possible control of all of djay Pro’s features.

To take advantage of Algoriddim’s existing world-class technology for high-performance graphics, audio, and hardware integrations, djay Pro for Windows was built in collaboration with Microsoft using the Windows Bridge for iOS project. This enabled creating a truly cross-platform app that bridges desktop and touch devices, while at the same time feeling completely native on Windows 10. Its deep integration with the Windows platform delivers an immersive experience with low-latency audio, smooth graphics, and plug-and-play hardware support.

djay Pro is the first DJ software on Windows with official Spotify integration. It allows DJs to directly access their Spotify accounts to find, play, and mix millions of songs in pristine sound quality with up to 320 kbps. Its extensive integration with Spotify’s Browse section provides curated playlists for DJs to instantly discover new music by mood, genre, and popularity. Using Match, an innovative feature that recommends tracks that go well with what the DJ is currently playing, users get an instant selection of tracks based on danceability, BPM, key, music style, and how well the song mixes with the currently playing track.

djay Pro integrates seamlessly with existing professional DJ hardware. In addition to supporting over 60 MIDI controllers out of the box by manufacturers such as Pioneer DJ, Numark, Reloop, and others, djay Pro also includes an advanced MIDI Learn system. This enables users to map each hardware control on their device to individual actions in djay Pro and customize their setup to match their style and performance needs.

I quickly downloaded the trial version on my PC and played around with it for a while, and it feels as responsive and fluid as the Mac version. I’ll try to test hardware integration with the Reloop Mixon 4 and I’ll update this article with those findings.

djay Pro for Windows is available from today, get the free trial here.

djay Pro for Windows
1 of 5

djay Pro has been evolving at a very quick pace, and with today’s release, it is available on effectively every modern computing platform, from tablet to full-size computers. This is a serious feat and beats all the big other packages in terms of platform compatibility by a big margin. Combined with the compatibility with the Pioneer DJ Nexus 2 system, Algoriddim is investing in making it’s platform more and more interesting to professional DJ’s.

What do you think of Algoriddim djay Pro? Do you use it to play gigs? Comment below!