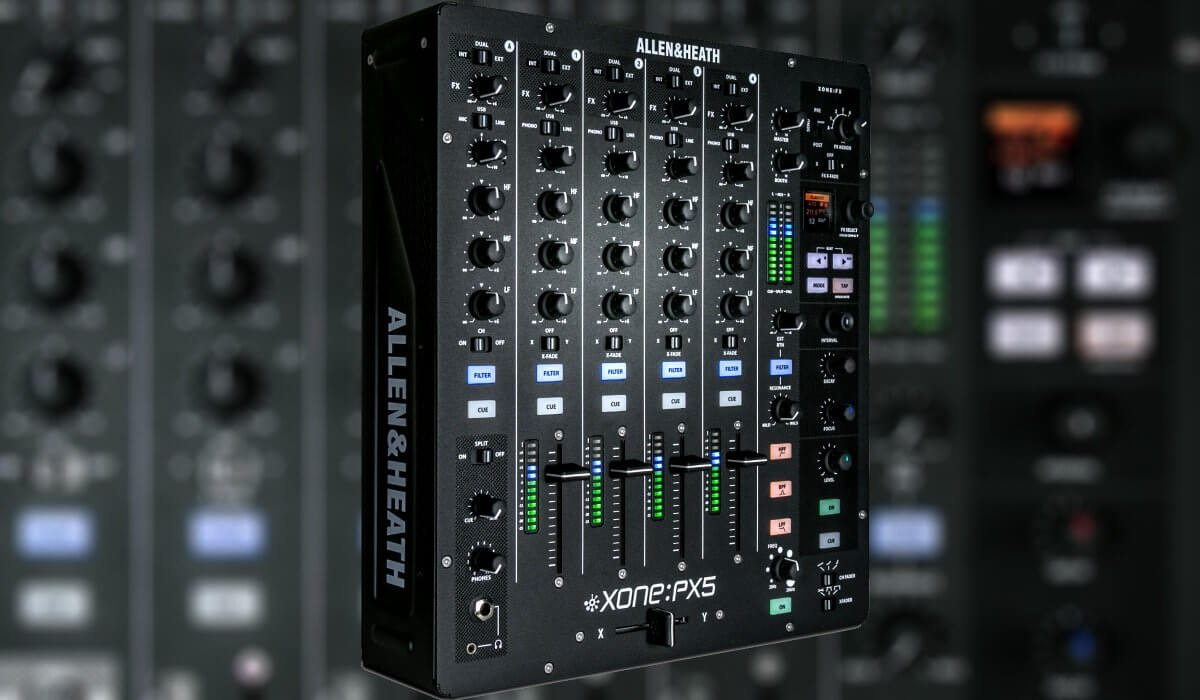 Since I started DjTechZone back in 2014 I have been wanting to get my hands on an Allen & Heath mixer for a review, and earlier this year at Namm I finally got in touch with the right people. Now, a few months later, I can say that the Xone:PX5 is an amazing sounding piece of gear.

Right out of the box the PX5 feels solid and well built. It’s not really heavy, but that doesn’t affect the quality feel of the unit. All the knobs and buttons feel right and are clearly built to last and ready to sustain heavy club abuse.

The color scheme is pleasant as well, the mixer is finished in matte black and most knobs & buttons marked in white. Some knobs have led markers fitted that vary depending on the setting, which really helps to understand in which state a given function is in.

The Xone:PX5 is a digital mixer with an analog soul. It has an internal 20 channel 24bit 96kHz USB2 sound card, compatible with Traktor Scratch in a DVS setup. There is an internal FX module, the famous Xone Voltage Controlled Filter (VCF) with extensive options, and send & return inputs & outputs to connect external effect boxes & modules.

The Allen & Heath Xone:PX5 has 4+1 channels. All channels are equipped with a “full kill” 3 band EQ. Channel A is a fully functional channel but lacks a line fader / VU meter, this being the only difference with the 4 other channels. It’s usable for connecting additional sound sources, but the lack of VU meter and line fader limit the control over sound levels.

There is a switch to set each channel to external or internal effects or both at the top. Right below is a knob to control to amount of send FX for each channel. This really shows the focus of this mixer, namely providing extensive control over external and internal FX sources.

Right above the CUE button, there is a FILTER button to activate the onboard filter. The absence of individual channel filter knobs as such might be odd if you are not used to A&H mixers, but in the end, it’s kind of refreshing to have different approaches and while everyone is simply copying Pioneer DJ it’s nice to see a company do their own thing.  More on the filter later.

Lastly, each channel can be set to phono, USB or line, with the exception of the A channel, that can be switched between mic, USB and line.

Instead of the line fader, channel A has headphone & microphone controls. The line faders are smooth and feel solid, and there is a switch available to adjust the channel curve to your liking.

It’s possible to replace the crossfader with an Innofader if you would like to do so.

There is a choice between an HPF (high pass) BPF (band pass) and LPF (low pass) filter and both the resonance as the frequency can be individually adjusted, making a wide gamma of sound manipulations possible. While having an HPF and LPF filter combined in 1 knob feels probably more natural to most DJ’s these days, the A&H way offers a deeper level of control and a finer scale of sound manipulation that, combined with the full kill EQ’s and the FX module, allow DJ’s to create intricate soundscapes.

The filters sound fantastic and really live up to A&H’s reputation on the subject.

Finally, it’s possible to route the send & return effects through the filter section, adding another layer of manipulation to the filter sound.

The effects section is the beating heart of the PX5. There are 16 effects in total, mostly variations of delays and reverbs. They all sound really well, and with the built-in controls, you are able to manipulate how the effects sound in a very extended way.

There are four knobs that allow you to tune different characteristics of the effects: interval, decay, focus, and level. The led in the knob will change color depending on the mode the module is in, allowing you to keep track of what is active at any given time.

Led illuminated knobs should be standard in my opinion, if only because they are a great way of lighting up those knobs in dark environments.

If you want to see the fx module in action, check out our video review below. Also, check out a few examples on how the effects sound on Allen & Heath’s Soundcloud page:

Overall, the PX:5 effects module is very powerful, and will let you, with a bit of practice, create intricate soundscapes, using the various parameters and send & return options at your disposal.

If you are into minimal, techno or any variation of these genres the effects here will be a dream come true. This is an effects module designed for musicians that create, more than for DJ’s that mix. I know that sounds pretentious, but it’s really the only way I can describe it…

It’s no surprise that the PX5 is equipped with a vast amount of inputs & outputs. There are RCA line inputs for each channel, including the A channel. All the channels are switchable to phono input except the A channel.

The MIDI port gives access the PX5 MIDI clock, so you can easily sync the mixer up with external MIDI gear. There is also an X:Link port to hook up other Allen & Heath controllers such as the Xone:K1.

On the output side, there is a master XLR output, master RCA output, and TRS output.

As discussed above, the PX5 can connect to a wide range of external effects/sound processing equipment, through the send & return TRS jacks and/or through the insert TRS jack.

The Allen & Heath Xone:PX5 fits nicely in the A&H mixer product range. It’s well built, sounds fantastic and is fairly straightforward to use, as long as you don’t dive into the very advanced features.

The PX5 is the ideal central hub for live performance DJ’s and producers, as it has all the necessary inputs & outputs, including an internal MIDI clock and send & return to external effect boxes. If you are into Ableton, drum machines and midi keyboards the PX5 is a good choice for you.

The effects are fantastic and the ways to manipulate the sound and how they affect the music are unlimited, but be aware the effects are mostly variations of delays, reverbs and echoes (see the samples above). If you need wider variations of effects, then the PX5 is probably not your first choice.

For me, the key thing that stands out here is the quality of the sound and processing. The filter and EQ sound vibrant and rich, and that alone is worth the price tag of USD 1.500.