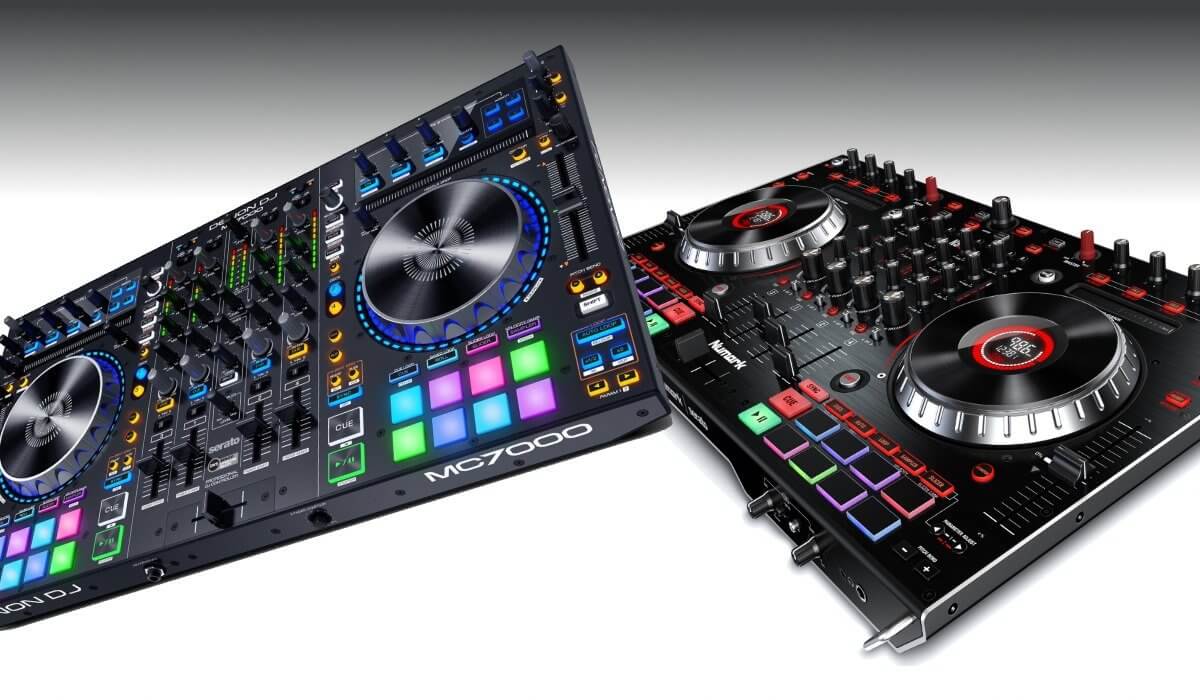 The Numark NS6II was recently announced to finally replace the slightly legendary Numark NS6. It’s a very solid piece of equipment, with a few stand-out features: double USB for easy DJ changeovers, and built-in LCD screens into the jog wheels. The jogs themselves are big and qualitative, and the probably more than suited for scratching purposes.

The NS6II has an independent hardware mixer built-in, which supports Serato DVS and allows expansion with media players and turntables.

The Denon DJ MC7000 is out for a while and shares the same double USB feature. It doesn’t have the built-in screen in the jog wheels, but there is a LED ring around each jog to indicate track progression.

The MC7000 also has an hardware mixer, with the same support for Serato DJ and the possibility to connect turntables or media players.

The MC7000 and the NS6II belong both to the same family, as InMusic owns both Numark and Denon Dj, so it shouldn’t be a surprise to see that their DJ controllers share similar features.

The question I would like to answer in this post, however, is: which one is better if you are shopping for a quality Serato DJ controller? The NS6II sells for around USD 800, while the MC7000 is slightly more expensive, around USD 1.000.  But is the MC7000, therefore, the better buy? Let’s find out!

If you know anything about Serato DJ controllers, then the deck interface for both controllers should be pretty familiar.

The MC7000 has clearly a few more controls than the NS6II. Notably, there are controls to adjust and sync the pitch using Serato’s Pitch ‘n Time expansion. There are buttons for the censor and slip function, grid adjust, a knob to set the stop time… The jog wheel are large, made of aluminum and have a led ring around them that indicates needle position. There are also 8 velocity sensitive performance pads that control the various Serato DJ performance features, including Pitch Play. Finally, there are load and library management buttons & knobs per deck. This is possible due to the double soundcard.

The NS6II has clearer decks, with a more basic feature set. The stand-out feature here are the LCD screens in the center of each jog wheels that display key information of the playing track. Very handy and worked well on the Numark Mixtrack Platinum. Besides that you will find all the usual stuff: effects section, full resolution pitch fader, performance pads, slip button…

The NS6II has a hardware mixer, but only channels 3 & 4 are switchable between an external input and Serato DJ. Also, the library management & track loading is done from the mixer panel, no separate controls per deck as on the MC7000. There are VU meters per channel and one for the master output. Finally, there is a 3 band EQ with gain control as well.

The MC7000 has also a hardware mixer, and all the 4 channels can be switched between USB and Line input, with channels 3 and 4 suitable for turntables. There is a sample volume which is handy if you use the Serato Sampler a lot. Otherwise, the mixer on the MC7000 is pretty similar to the NS6II: 3 band EQ on each channel, gain volume, VU meters per channel and 1 VU meter for the master. Really complete!

Most of the Mic & headphone controls are on the front of the NS6II: 2 band EQ per microphone, crossfader curve control, and headphone controls. It makes the top plate cleaner, but front knobs are a bit more out of sight and kind of hard to reach in small, badly lighted booths. The roll bar will help to keep enough space free to reach them (especially when your NS6II is in a flight case).

The front of the MC7000 is a lot cleaner since all the microphone and headphone controls are located on the top plate. I personally find that a better solution as they blend better with the rest of the controls. And if you are a professional DJ, you will be adjusting headphone levels regularly.

On the back, the NS6II and the MC7000 are pretty similar. The MC7000 has 2 XLR outputs, both for booth monitoring and master out. Also, it has RCA in for each channel.

The NS6II has only RCA input for channels 3 & 4, and the booth out is RCA instead of XLR.

Overall, both are suitably equipped to connect to all sorts of sound systems, as a professional DJ controller should be.

Putting these two controllers against each other doesn’t make it any easier to choose between them, on the contrary. They both have their unique advantages.

What I really like on the MC7000 is the fact that all the knobs & buttons are situated on the top plate of the controller. The mic & headphone controls on the front of the NS6II is OK for home DJing but can be annoying when playing live or in dark/tight club booth setting.

On the other hand, the LCD screens on the jog wheels of the NS6II are brilliant, and really help to focus on your audience opposed to the computer screen.

So what to choose? Despite the onboard screens and all the other features, I feel the MC7000 is the better choice here. For USD 100 more you get a controller that has a slightly better layout, a mixer that can accept external input for each channel and XLR booth out. This doesn’t mean that the NS6II is not a good Serato DJ controller. I would still pitch it over many other Serato DJ controllers out there, but against the MC7000 it falls a little bit short, even if it’s a bit cheaper.