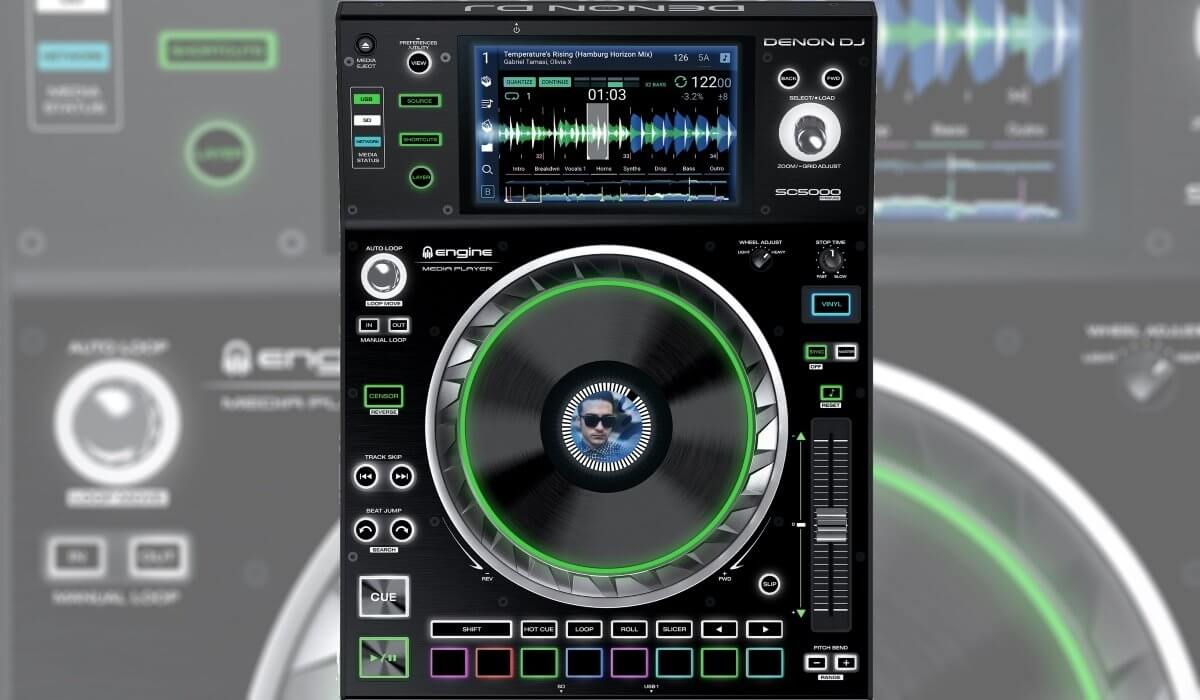 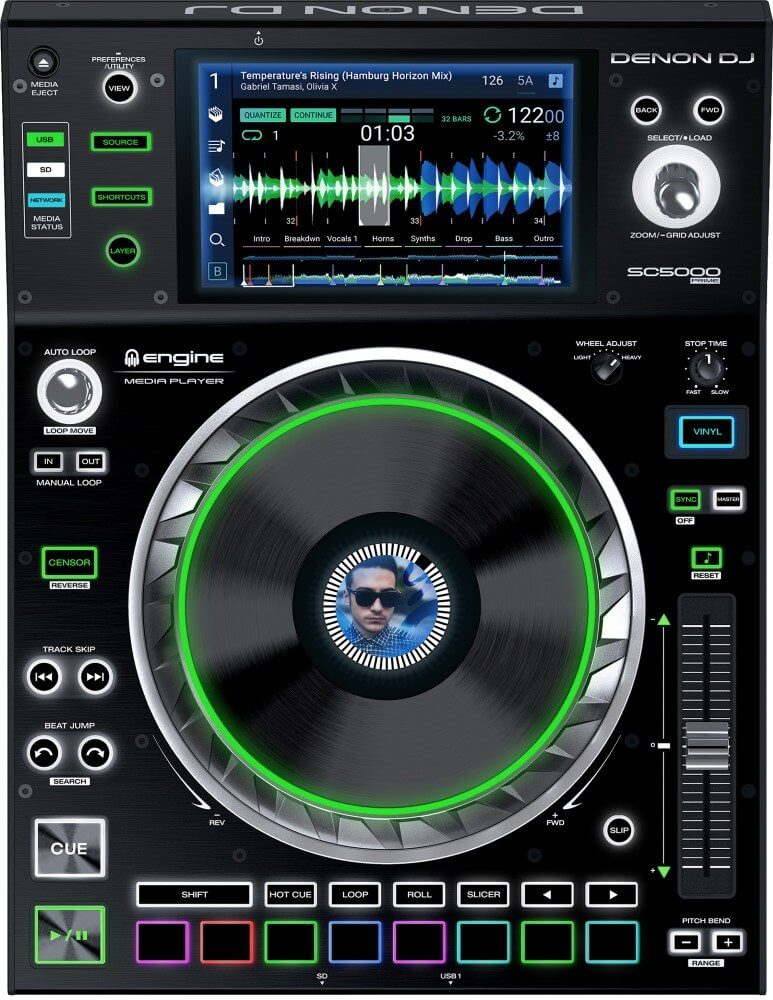 The SC5000 Prime is Denon DJ’s answer to the Pioneer DJ’s CDJ-2000NXS2. As such, the feature set is very similar, with a full-size jog wheel and a full high-resolution jog wheel. The SC5000 Prime has, however, a few innovative features that stand out:

The player is extremely well built, and this is a key requirement as it’s meant to be used in professional environments. The screen is bright, with clear, easy to read graphics and a snappiness that, until now, was not available in DJ products.

It really feels like using a tablet or a smartphone, and most of the multi-touch gestures you can do on those can be done on this screen too. The fact that one player can act as 2 virtual players is a big plus since it allows for 4 player setups with only two physical players, saving a lot of space in the process, and in cost.

But also because the Link feature allows for precise sharing of track data between the mixer and the other players, and color coding makes it easy to know which virtual deck is connected to which mixer channel when using the double layer feature on the SC5000 player.

First of all, let’s take a closer look at the screen. The screen is 7-inch in size, multi-touch and very snappy and responsive. It gives access to your crates, playlist/history, prepare list, files and search function. Because of the multi-core processor, it’s possible to swipe tracks around as you would do on your phone or tablet, and that is not only innovative for DJ gear, but it also aligns this product with what we are used to in 2018.

Pioneer DJ will definitely need to catch up here with their next player.

Even if using the touch controls on the SC5000 feels very natural and intuitive, there are still physical controls, including a big rotary controller to search and load tracks. 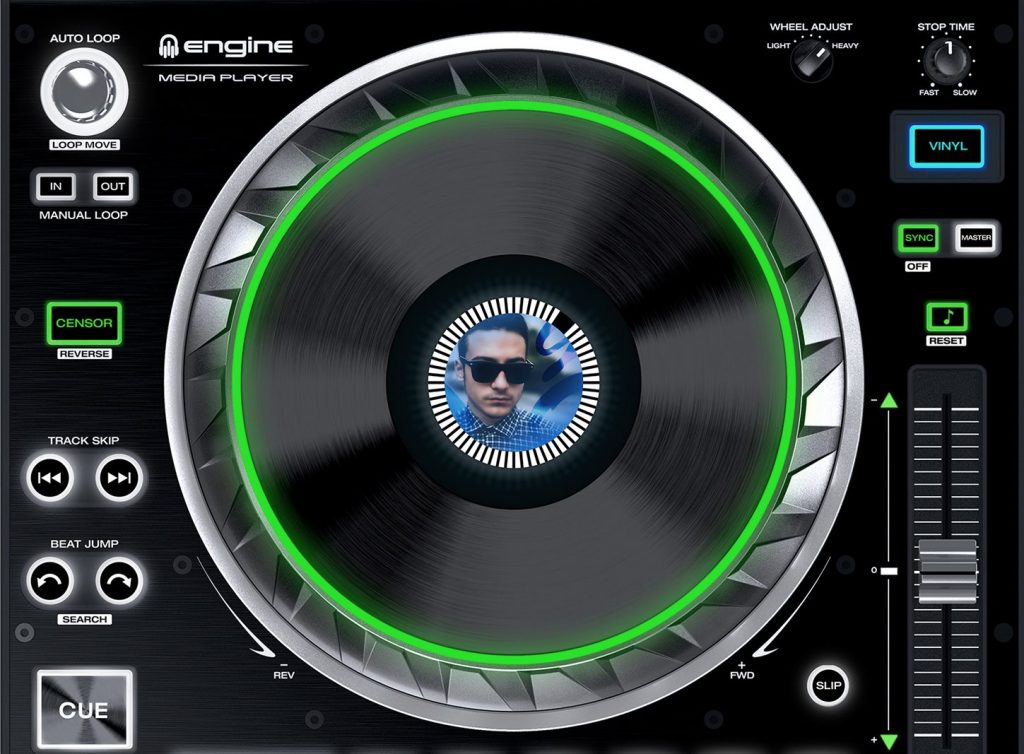 The jog wheel is of the touch capacitive type that you will find in most high-end controllers, and not mechanical, as on the CDJ-2000NXS2. This means that simply touching the platter will stop the track, and some might miss that mechanical click. I personally don’t and to me, the jog felt really great.

In the center, the jog wheel features an LCD screen that displays track art, loop sizes, and even your personal DJ logo. This is a clever touch and certainly catching on, as other vendors have done this as well. Pioneer DJ has gone even further with the DDJ-1000 by integrating waveforms as well, but that is another story.

The colorful LED ring around the jog is not for decoration only. A very important feature of is that it changes color depending on the selected layer, and more importantly, when connected to the X18000 mixer through LINK, each channel’s cue button will color in the same color, making it easy to see which layer is outputting to which channel on the mixer. Great!

The jog wheel has both tension control and stop time control, two features expected by professional DJ’s so good to have them onboard.

Looping is a heavily used tool by modern DJ’s and often the usability of loop sections on controllers/media players is questionable at best.

I really, really like the encoder here, since it makes setting a loop size so easy. Combined with the quantize function on the player and the clear looping indicators on the touchscreen and the jog’s LCD screen, missing a loop on this player is hard to do.

A real departure from other media players is the inclusion of performance pads on the bottom of the player. It adds a layer of performance features that are usually only found on DJ controllers.

The performance pads have different functions that will sound very familiar to controller DJ’s: hot cue access, loops ( it’s possible to call saved loops, or set autoloops of different sizes), roll and slicer. The pads are rather small and close to each other, which can be a bit of an issue when doing complicated routines, but they are of excellent quality and very responsive.

On the left of the player, there are buttons to browse between tracks, and just below there are beat jump buttons, a popular feature on more recent DJ controllers.

Finally, there is also a slip button that allows layering performance tricks over a playing track without the track being interrupted.

As said, the Denon DJ SC5000 Prime doesn’t support CDs. This seems like a no-brainer in 2018, but you would be surprised to learn how many professional DJs are still carrying around CD’s even it’s only for backup purposes.

Consequently, the space in the front usually taken up by a CD loading mechanism is used to host the SD card slot and the USB slot. It makes both a bit hard to access, but on the other hand, it makes it harder for someone to accidentally remove inserted media by accident.

On the back of the player, there are additional USB ports to attach mass storage devices.

To be clear, and I have said this before, Engine Prime is not yet at the level of Rekordbox by Pioneer DJ. But it has improved vastly over earlier versions. It supports Serato DJ playlist, and recently it’s also become possible to import Traktor playlists, which seriously adds to the versatility of the SC5000 Prime player.

Engine Prime is actually embedded into the player itself, which makes it possible to plug in media with tracks that have never been analyzed by any software and, in real time, detect BPM, set the beatgrid… This is a smart move by Denon DJ as it really creates a consistent ecosystem around Engine Prime, both on the player level as the separated preparation software for Mac and PC.

And this is a big thing. Denon DJ is trying to get DJ’s to try on the Prime system, and forcing professional DJ’s to convert all their tracks using Engine Prime is probably not a good way of doing that.

Support other software is the only way, and certainly, supporting Rekordbox created USB sticks directly on the SC5000 players is a smart way of lowering the barrier for Pioneer DJ’s to at least give the Denon DJ players a try. 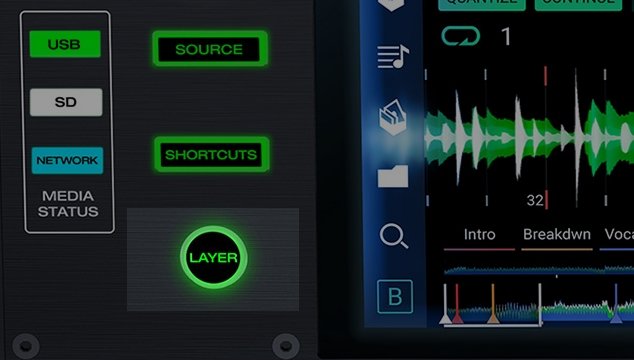 The double layer feature really makes the SC5000 something special compared to the competition. Again, if you are a controller DJ you are scratching your head on how this is something new. After all, DJ controllers have had double layer features on physical decks for years, as these have only two decks and most DJ software supports (at least) 4 decks.

But for media players, this is definitely new. Here, again, we see the power of the multi-core processor that can handle two tracks, with all its metadata, to be played at the same time.

The big challenge is to create an interface that doesn’t confuse DJ’s, as in which is the active layer at any moment. Denon DJ achieved this by color coding the LED ring around the jog wheel, the layer button, the layer indication on the touchscreen and most importantly, the cue button on the channel of the X1800 mixer used by the virtual layer when connected through LINK. Also, the fact the cover art is shown on the jog wheel’s LCD screen helps a lot.

All this makes it dead easy to be aware of which is the active layer and to keep track of which layer is outputting sound to which channel on the mixer.

On the back, we find an array of output options. Most notably, there are double RCA and digital outputs. These are there, of course, to support the double layer feature. Furthermore, there are two more USB inputs to connect SSD or HDD disks, a USB output to link the SC5000 to your computer and the ethernet LINK feature to hook up the player to the X1800 mixer and share data and music between the mixer and other players.

The SC5000 has a cool power related feature as well: if the power cord is removed, the player is capable of playing on for a few seconds, just enough time to plug the power cord back in again.

Much more can be said about the SC5000 Prime, and in this review, I only looked into the main features. But I think this should be more than enough to draw the inevitable conclusion: the SC5000 Prime is a fantastic media player and has finally delivered the features DJ’s didn’t even know they needed.

This player is, for me, the industry standard from a technology point of view. I’m sure that the release of a new and improved Pioneer DJ top-of-the-line media player is imminent, and while I don’t expect to see performance pads or a double layer feature, I do expect to see a vastly improved touchscreen, and more performance oriented onboard features.

The SC5000 was released more than a year ago, and while adoption might have been a bit slow, the player is popping up more and more in clubs and festivals.

With the release of the new SC5000M, Denon DJ really delivers for DJ’s that love turntables but also wants the benefits of a modern DJ media player, and that should help push the Denon DJ ecosystem into the hands of more and more DJ’s.