DjTechZone Is Your Daily Dose Of DJ Gear News And Reviews
Home DJ News Denon DJ VS Pioneer DJ: the battle of the media player! 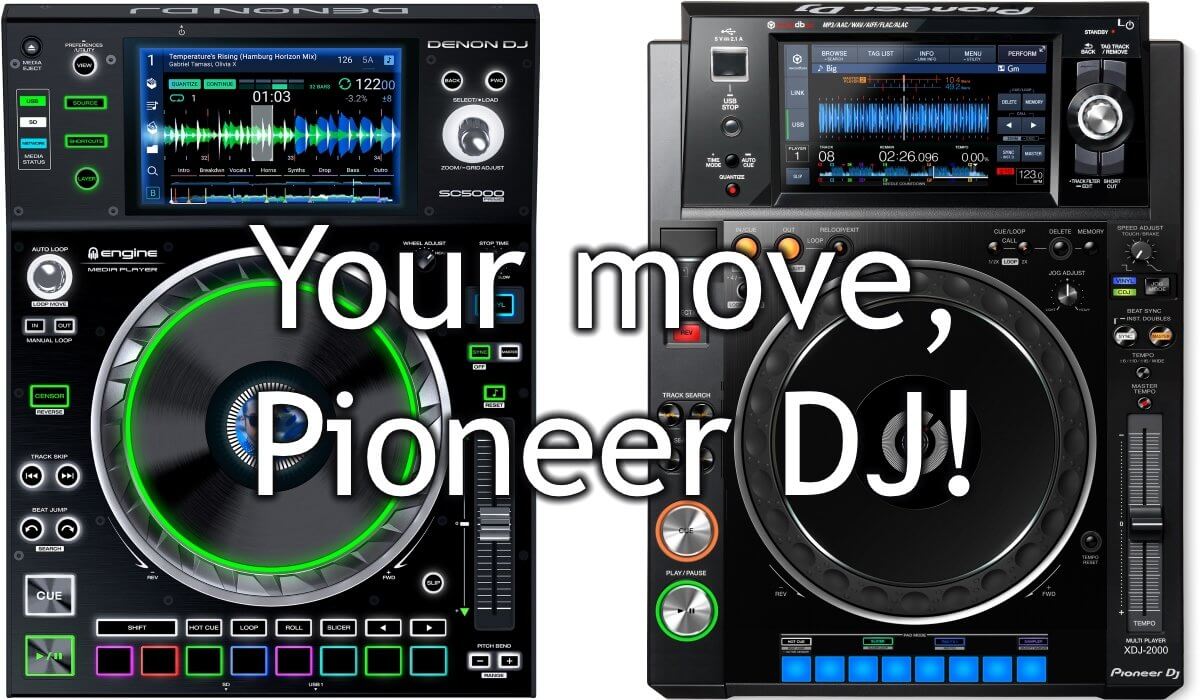 2017 started with a bang, and Denon DJ has unleashed their newest media player on the world: the SC5000 Prime.

There is also a new mixer, a new turntable and new Engine software, but the clear center focus of this assault on the professional DJ gear scene is the SC5000.

Essentially, Denon Dj has brought media controller technology to 2017 in one swift move, and everyone is now looking at how Pioneer DJ will respond.

Denon DJ has an (aggressive) plan

Denon DJ has been bringing out DJ media players similar to the Pioneer CDJ players, with one big difference: the Denon DJ media players usually have had moving platters, to accurately simulate the feeling of using a turntable.

Sadly for Denon DJ, they could never really make a fist against Pioneer DJ were it really counts: in the DJ booths of clubs and festivals.

The evolution of the Denon DJ SC line

The contrast between the 2012 era players and the SC5000 could not be sharper. The old SC players look like early CDJ-1000 models, the SC5000 looks like a mix between a high-end DJ controller (because of the pads), a tablet and a CDJ-2000nxs2.

Before going further, it’s important to notice that Denon DJ was acquired by the inMusic group back in 2014. Without the support of the inMusic group, it’s hard to imagine we would see the Denon DJ product line evolving has it has been evolving since 2015.

So back to the media player strategy. My guess is that right after the acquisition by inMusic, the ambitious plan to overtake Pioneer DJ in the professional DJ market was properly launched. Clearly, the SC line was not making the impact it needed to make, and the inMusic execs wanted more. Maybe this is not the way it really happened, but I have worked in corporations my entire life, and this is usually how things go.

What Denon DJ understood well, even very well, is that music management and preparation is absolutely key here. Pioneer DJ’s ecosystem of CDJ’s and DJM’s is not complete without Rekordbox. This is because the CDJ players really heavily on Rekordbox to prepare the tracks (beat grids, bpm, cue points, key..) so the DJ has access to the media player’s advanced features.

To offer a decent alternative to Rekordbox, Denon DJ re-build their Engine software from the ground and called it Engine Prime.

If you watch the video above and certainly if you worked with Engine 1.5 before it won’t be difficult to understand that Engine Prime is a huge improvement, and if it is smooth and bug-free, it could give Rekordbox a run for its money.

But the real shocker is not this. The absolute killer feature of the Denon DJ SC5000 is that it’s equipped to analyze and prepare music files by itself.

No need to prepare the files, no need to pre-analyze. Push your freshly bought tracks to USB media, connect and start playing. The player takes care of everything.

This won’t please everyone since many DJ’s are obsessive about track preparation, but this gives Denon DJ the killer argument that even if DJ’s haven’t done any preparation work in Engine Prime, they will be able to use the player with all of its advanced features!

. The SC5000 now reads Rekordbox USB sticks! It does recognize metadata from Serato though so that is already a big plus.

The screens look fluid as hell from the introduction videos, and seem to work much like an iPad or iPhone does, with support for multi-touch and multi-gesture. This again is important, because a fantastic user experience with the screen is key for DJ’s that need to find their tunes quickly and accurately when performing.

It might look like a gimmick, but wait until those Pro DJs see what they can do with them… I have always admired performance oriented DJ’s that took risks (Laidback Luke comes to mind) and with these pads, hopefully, more DJ’s will start using rolls, slicer and auto loop, things that have been part of the DJ controller world of features for quite a while now.

There is so much more to say about the SC5000, but let’s keep it at that for now.

Mojaxx from DJcityTV has posted an early first look of the SC5000, check it below to get a better feeling how everything works:

Get the word out

So will all those shiny new features alone get Denon DJ to challenge Pioneer DJ in the booth? Not by a long shot. It will take a lot, and I mean a lot of effort to get DJs to pay attention.

They might truly fall in love with the SC5000, or the full Prime ecosystem, but from there to change their entire workflow, that is a huge step. My guess is that it will take workshop after workshop, demo after demo and a lot of free gear to change things.

In a way, Denon DJ has to make it so attractive to Pro DJs to at least give the Prime Series a try that they just can’t say no. And that requires a serious amount of marketing budget!

Expect to see Denon DJ getting their foot into festivals this summer with special showcases of the Prime Series, and maybe, the endorsement of a few superstar DJs. It would be amazing seeing a 4 SC5000’s and an X1800 instead of the trusted array of Pio CDJ’s setup at a big festival. And if only 1 big name DJ makes the switch that would be enough to turn heads, believe me.

In the end, Dj’s are musicians. And musicians play on their own instruments. Festival and club promoters have been very lucky that 1 brand has dominated the professional DJ gear market, making superstar DJ riders virtually identical. There is no reason this should be like this and Denon DJ is locked on target to change this.

So Denon DJ has a difficult mission in front of them, and Pioneer DJ at the very least, some competition to look forward to. But how does a company behave with virtually no competition at all? Let’s explore a bit further.

By the time the CDJ-2000 came into the market in 2009, Pioneer DJ was firmly established as the industry standard in the DJ booth. This domination started essentially with the introduction of the first pro-grade CDJ back in 2001, the CDJ-1000, later known as the CDJ-1000MK1.

This was a direct hit with the DJ crowd, and with the rise of CD’s as a popular medium to carry music, Pioneer DJ started a domination of the professional DJ booth that has lasted until today. As you can surely see from the picture, the CDJ has evolved very little visually over the years. The CDJ-1000 looks very similar in layout and features to the latest CDJ-2000, even if a lot has changed under the hood.

This loyalty to the iconic CDJ layout becomes more apparent when putting the different incarnations of the CDJ-2000 next to each other:

Only a DJ can tell the difference between the CDJ-2000 launched in 2009 and the CDJ-2000nxs2 launched earlier this year.

This is done for various reasons, and a bit similar to the approach the Apple has had for over 10 years with their iPhone:

All those DJ’s expect familiarity in the DJ Booth, and if you start to shake things up too much, you risk confusing people and putting them off. I’m sure there must have been endless debates in the Pioneer DJ product team meetings about adding (or dropping) features, but ultimately, the choice has always been to evolve smoothly and avoid big, abrupt changes.

This has ensured that Pioneer DJ has kept their dominance in the DJ booth, but at the same time, their products start to lack features that DJs are more and more taking for granted these days, especially a new generation that is used to large touchscreens and, above all, velocity-sensitive performance pads. This becomes clear as an entry level Pioneer DJ controller for Rekordbox DJ (ex the Pioneer DJ DDJ-RR) can do things (sequencer, use of performance pads) that the CDJ-2000nxs2 struggles to do, or even do at all. But again, all that is marginal to the main strategy of never changing a winning design.

How will Pioneer DJ react?

Much like Apple competitors when they came out with the iPhone, there are a variety of ways Pioneer DJ can react to this:

Option 1: Ignore the whole thing and wait for it to blow over, and then go back to slightly adapt the CDJ-2000nxs2 for the next 5 years. This is the way things have been for over 16 years, why change. Denon DJ has tried before and failed, and Pioneer DJ is synonymous with professional DJing. Nobody in their right mind would dare to abandon ship anyway.

That’s what Blackberry thought when the iPhone came along, and we all know how that ended don’t we… Now I’m not saying the SC5000 Prime is an as radical and above all as genius move in term of product innovation, but in the conservative world of Dj’s (as some think that any DJ not using two turntables and a mixer is not a DJ) it’s quite a bold and aggressive nonetheless.

Option 2: be slightly impressed, but since they saw it coming for a while now (the fact that Denon DJ was working on a new line of professional DJ gear wasn’t exactly a secret) they adjusted their roadmap accordingly and the final touches on the XDJ-2000 are being decided at this very moment, complete with enormous, high-res, full colour and multi-touch/multi-gesture screen, onboard track preparation and analysis with the embedded Rekordbox (DJ) engine, customisable center LCD on the jog wheel and 8 glorious performance pads to take full advantage of all of Rekordbox DJ’s features. Yes, that sounds like a clone of the SC5000, but then again, the SC5000 copies the CDJ design & ergonomics on many different points…

People will fall in love with the SC5000 for a while but everybody will forget about it if a player such as described above comes around in the next few months. And Denon DJ is back where they started.

And finally, option 3: panic. Call up all the customers, tell them that the next big thing is coming soon from Pioneer DJ that will put the SC5000 to shame (even it that is not true), threaten DJ’s that are about the make the switch… And then try to push out quickly something that hopefully kills the Denon DJ buzz.

I think option 2 is probably the way Pioneer DJ will react to all this and we might see the first signs of it already at Namm 2017, starting next week. And if that is the case, guess who wins? Indeed: the DJs. More options, more competition, more variation: it keeps everybody sharp, and it forces Pioneer DJ to probably speed up their product lifecycles a bit. Remember, the CDJ-2000 has remained very similar for over 7 years, in a marketplace that they need to compete against another big player that would never be the case, trust me.

I just can’t wait to see how this historical clash will turn out. What about you? Comment below!