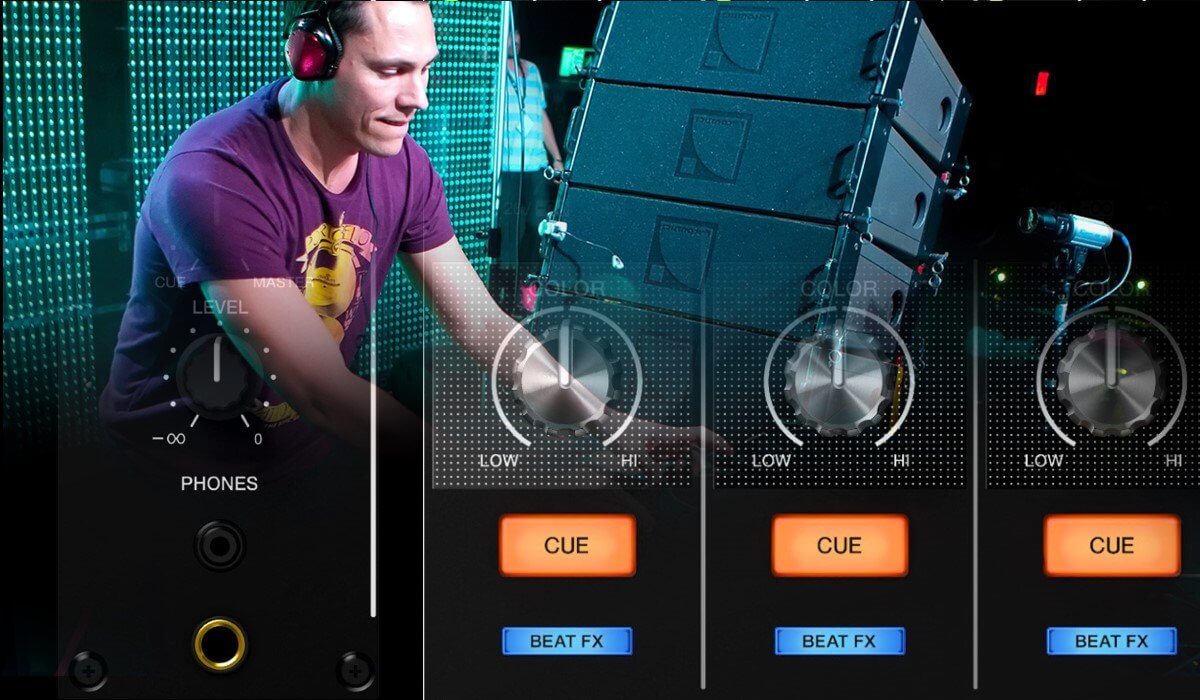 Hi, I am new in the business and I am wondering why DJs always listen shortly at their headphones. Can someone explain me this? Are they listening to the next song and prepare it for the mix?

To a DJ this question has an obvious answer, but to people starting out it still might be a bit of a mystery. Surely there must be more to it besides looking cool?

Essentially, DJ’s listen briefly in their headphones to cue the next song they want to bring into the mix. The reason they are listening to only one cup is to allow them to beat match (explained later in this article) the next song to the song playing through the speakers. In order to do that, the DJ needs to do a few actions on his/her DJ gear.

As shown in the image above, a typical DJ mixer (here the  Pioneer DJ DJM-900NXS2) will have for each channel a cue button that will light up when pressed.

When active, it will send the audio coming into that channel to the headphones, even if the channel line fader is completely down. This way, the DJ can hear the music, while the audience can’t.

Secondly, a typical DJ mixer also has some headphone controls. The DJM-900NXS2 has, as shown on in the left part of the image above, a split cue function, a mixing knob and a level knob. Let’s break down what these mean:

In a typical DJ setup, you might see big speakers sitting next to the DJ:

DJ headphones are a bit special. DJ’s can fold the left or the right ear, in order to have one ear comfortably covered by an earcup and one ear free to listen to the master sound (coming through the monitors). Only in the case of using split cue as described above, the DJ will wear the headphones entirely over his/her head, as both cue sound and master sound will play through both earcups.

Some DJ’s choose to play without headphones and rely purely on visual data provided by their DJ gear.

The image above is of the Denon DJ SC5000 media player, and contains a lot of information of the track loaded into the player: BPM (beats per minute), the track’s waveforms with beat grids and color coding, the time elapsed/remaining, pitch information…

All this information can be used by a DJ to basically mix two tracks together without the help of headphones and purely looking at the information provided by the screens. While this is a valid way of DJing (there are no written laws against it…), it does rely entirely on data provided by the media player. If the information is incorrect and the beat grids are only slightly off, the two tracks might not mix well together. In a big stadium with a top of the line sound system, this will become painfully clear and the audience will hear it.

Some DJ’s, a famous example being Laidback Luke, use in-ear monitors to mix. The biggest advantage these have is that they mute outside sounds better than headphones and protect the DJ’s hearing. With Tinnitus ( a constant ring in your ear caused by exposure to excessive volume levels) a real threat to DJ’s and audiences, taking care of your ears is a smart move.

We discussed the technical aspects of using headphones, but how do they help the DJ to mix exactly? How are they instrumental in mixing two tracks together?

The process of mixing a cued track with a playing track is called beatmatching. I won’t go into full details here, for that please see my dedicated article on the subject, but to put it simply:

The DJ needs to adjust the tempo of the incoming track, in order to match the tempo of the playing track. By using the cue functionality of the mixer described above, the DJ can hear the incoming track without the audience hearing it, adjust the pitch of the track with the pitch fader, cue it properly at the starting point, and bring it into the mix by gradually opening the line fader or switching the crossfader.

There is more to properly mix two tracks together than this (EQing is a critical part of mixing), but that would take us too far in this article.

What are your thoughts on using headphones while DJing? Did I miss something? Comment below!

Pioneer DJ And TCSupply Partner Up To Control Lights With ShowKontrol