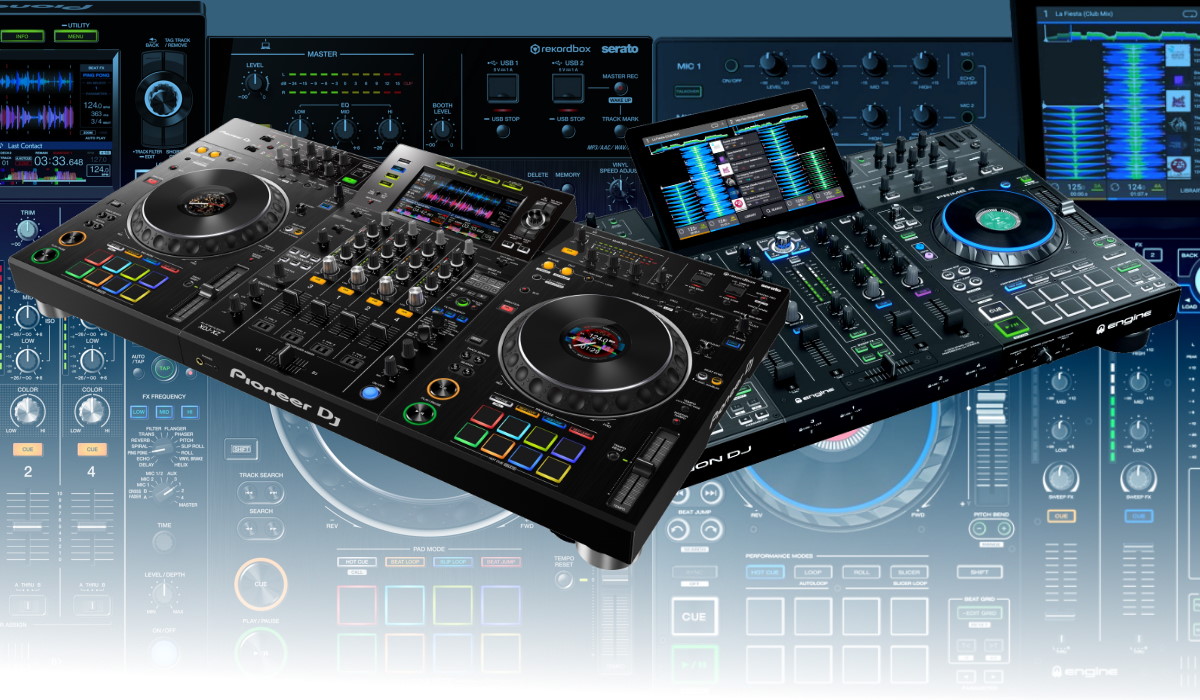 Now that Pioneer DJ has released its top-of-the-line Pioneer DJ XDJ-XZ all-in-one DJ media player, it’s time to compare it to its counterpart from Denon DJ, the Prime 4. Both are extremely complete DJ systems that will fulfill if not all, most of the needs of any professional DJ.

The Pioneer DJ XDJ-SZ is a huge piece of gear, in the tradition of the  Pioneer DJ DDJ-RZ and others. It follows the tradition of the Pioneer DJ XDJ-RX2 and other stand-alone Pioneer DJ media players. The DDJ-XZ however, is the flagship. With large, CDJ-like jog wheels, a large LCD screen in the middle, and a 4 channel DJM-like mixer section. Showing up with the XDJ-SZ at any gig will show your customer and audience that you mean business, and while it’s perfectly possible to use a 100 USD DJ controller for any gig, having professional gear is part of having a professional image as a mobile or club DJ. And that counts for a lot.

It also has a bay for a dedicated SSD disk, so you can basically have your entire library on board without the need for USB sticks. Lastly, the Prime 4 features Zone Output, a feature that allows sending the output of a channel to a totally separated set of speakers. Add to that the fantastic screen that offers multi-touch support and adjustable viewing angles, and it becomes clear the Prime 4 is ready to battle the XDJ-SZ on many fronts. Let’s find out how both compare!

The screens of the XDJ-XZ and that of the Prime 4 are quite different. The Prime 4 has a large 10-inch multi-touch screen that feels and acts like any modern smartphone or tablet screen, supporting “advanced” gestures like swiping (I put advanced between quotes because we are in 2020, after all). It displays 4 waveforms in vertical or horizontal view and has a mechanism to tilt the screen in pretty much any angle you want.

The XDJ-XZ has the same screen all CDJ’s and XDJ’s have had for years. It’s 7-inch and it only supports very basic touch gestures, so don’t expect any swiping action here. That being said, it’s bright, clear and delivers all the necessary information. The screen is surrounded by a lot of hardware buttons and knobs to control the different features of the unit. This setup will feel extremely familiar to anyone that ever used Pioneer DJ gear, and while it’s not technologically up to date, it does perfectly what it’s supposed to do.

Both decks are quite similar in layout with the biggest difference being the placement of the pitch fader. Both have 8 color-coded performance pads per deck and a large jog wheel. The XDJ-XZ’s jog wheel is larger, being the same size as the one on high-end CDJ units. Also, the central LCD display on the XDJ-XZ is more advanced, as it shows a lot of useful track information, including a static waveform, besides the track art. Finally, the XDJ-XZ’s jog wheel is mechanical, like the professional CDJ’s. The Prime 4’s jog wheel is touch capacitive like most DJ controllers. This is not a bad thing by any means, but many pro-level DJ’s prefer the mechanical jog wheel feel.

The Prime 4’s mixer is a fully loaded 4 channel professional mixer with all the features one can expect from a high-level media player. In the middle on top, there is a large load and navigation knob that should be easy to use in any situation. Each channel has a 3 band EQ and large VU meters. Input & output control knobs are placed next to the screen. On the left, all the microphone input controls and on the right, the booth, master and zone output volume controls (more on that later).

The XDJ-XZ’s mixer is laid out a bit differently. It really mirrors the look and feel of Pioneer DJ’s famous club mixers, such as the DJM-900NXS2. The mixer has 4 channels (keep in mind only 2 channels support standalone use though, unlike 4 channels for the Prime 4). Each channel has a 3 band EQ, which can be switched between regular and isolator mode (which kills the sound completely when activated fully) and large VU meters.

The master channel controls are situated on the right next to the screen and contain a VU Meter, CUE button, level button, and even a dedicated 3 band EQ. On the left side, all the microphone controls are located, included a feedback reducer, which comes in very handy for mobile DJ’s!

The Prime 4’s effect section is quite innovative and to be honest, I really like it. There is a sweep FX section on the mixer, containing 4 effects buttons (filter, echo, wash, and noise) and these effects are controlled by a big sweep fx knob on each channel.

But there are also per channel effects sections that not only offer control over various parameters per effect, but even have small LCD screens that show the selected effect and the state of the various settings (fx parameter, fx frequency, and fx wet/dry). These screens would be very nice to see on regular DJ controllers, as it really helps DJ’s to focus on their workflow instead of having to look at their laptop screens.

The XDJ-XZ’s effect section is very similar to what you will find on a professional DJ mixer from Pioneer DJ. On the left, there is the sound color FX section, with 6 effects in total: Space, Dub Echo, Sweep, Noise, Crush, and Filter. These effects are activated using the color effect knob on each channel. On the right of the mixer, there is the beat effects section, with 14 effects in total, the X-Pad to quickly switch the beats per effect, the FX frequency knobs to limit an effect to a specific EQ spectrum (Low, mid or high).

The Prime 4 has master outputs in RCA and XLR, booth output in XLR and a very special zone output in XLR, that allows sending a specific channel to a completely different set of speakers, which is a very interesting feature for Mobile DJ’s. On the input side, the Prime 4 has an RCA input for each channel and two XLR microphone inputs.

the XDJ-XZ has a booth output in TRS, a master output in XLR and RCA and specific Send output that can be used with external sample units (for example, with the DDJ-1000). On the input side, there are RCA inputs for channel 4 and 3 and an additional AUX input. Contrary to the Prime 4, you cannot use channels 1 and 2 in standalone mode. There are also 2 TRS microphone inputs.

Undoubtedly, both the Denon DJ Prime 4 and the Pioneer DJ XDJ-XZ are both highly competent and professional media players.

The Denon DJ Prime 4 is innovative in many ways, with its large screen, zone output, and standalone capacity on all channels. It’s really a big step forward in the world of media players, and it puts Denon DJ firmly on top. The Pioneer DJ XDJ-XZ is the logical evolution of Pioneer DJ’s media player product line, and it delivers on many fronts.

One disappointment is certainly the fact the XDJ-XZ cannot be used in standalone mode across the 4 channels.