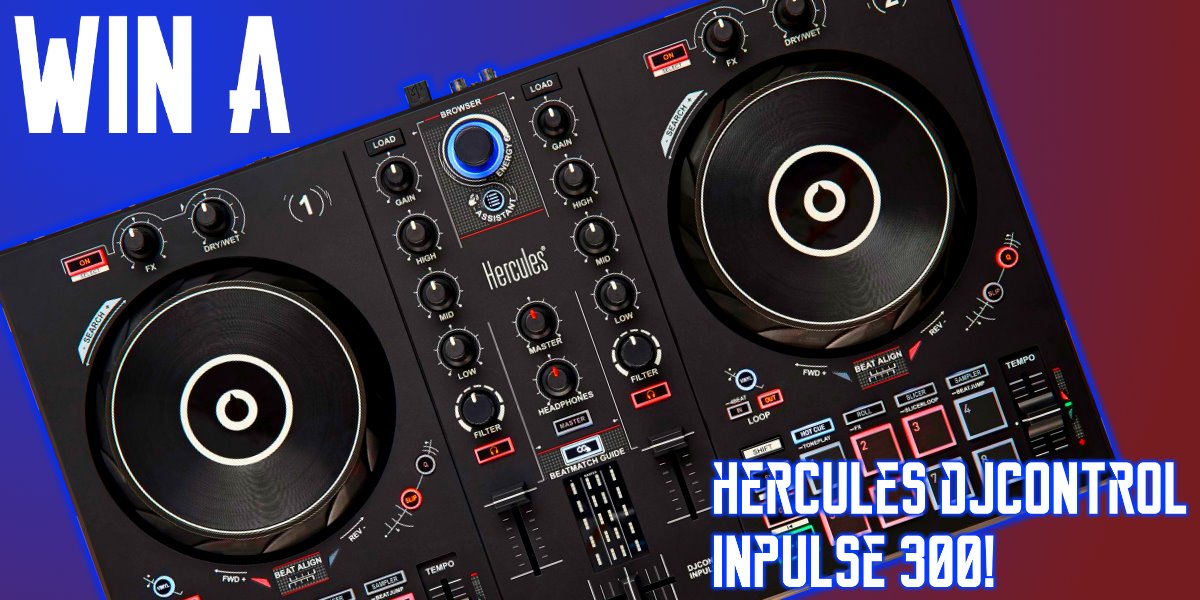 Want to win a Hercules DJControl Inpulse 300? Here is your chance. We are launching a contest and you can win your own Inpulse 300 simply by subscribing to our newsletter. Go to this page to fill out your details, and good luck!

The Hercules DJControl Inpulse 300 is the top of the line DJ controller from Hercules, which is remarkable since it sells for only USD 199. And for that price, the Inpulse 300 is remarkably well made. For sure, it’s all plastic, but it all feels very solid and well made. The surface has a rubbery/soft touch feel, which is very pleasant.

The Inpulse 300 comes in a neat package, with a quick start guide and a high-quality braided USB cable.

It’s also very light, which makes carrying the Inpulse 300 from party to party a breeze.

What really stands out with the Inpulse 300 is the number of features you get for the price: 8 performance pads per deck, large jog wheels, slip and quantize, full 3-band EQ, gain and filter controls, effect sections. This will ensure that when you improve your skills as a DJ, it won’t immediately be necessary to change to a more equipped controller.

The Inpulse 300 comes with a fully redesigned version of DJUCED. This new version feels more professional and polished than previous versions and comes very close to the likes of Serato and Rekordbox DJ when it comes to features, functionalities and look & feel.

Also, Hercules DJ included a series of tutorial videos in DJUCED that will help you to get the basics of DJing right.

This is a great idea and a precious aide for absolute beginners, as the Inpulse 300 has quite a few features and functionalities that won’t be immediately clear to them, so guiding them through the basics is essential.

Finally, the Inpulse 300 has a built-in soundcard and that is not a given for a sub USD 200 controller. This means you can plug in your speakers directly into your controller, and don’t need to go through your computer’s audio output.

The installation procedure is very easy and straightforward. Just install DJUCED, connect your Inpulse 300 and a handy setup menu will guide you through the rest of the setup.

I really like the fact Hercules made sure the setup procedure is as simple as possible, considering the target audience of this DJ controller. This is not always the case, as I still encounter problems with entry-level DJ controllers from established brands that make me wonder how inexperienced users get the gear to function eventually. Nothing of that with the Inpulse 300.

Hercules DJ has come up with some very exotic deck designs in the past. I reviewed the Hercules DJControl JogVision in the past and despite my very positive impressions, the very particular deck design left me scratching my head.

The Inpulse 300 doesn’t try to be innovative on the design front but adopts a design approach already tried and tested by the competition. And that’s a smart approach since it has been proven to work.  Also, for DJ’s that might have to switch to other controllers from other brands from time to time, having this familiar design will certainly help to make the switch smoother.

So let’s start with the effects. These are very simple: There is one button to activate or select the effect, and two knobs to control them: one to adjust the intensity and the other to adjust the dry/wet ratio. This should be more than enough for the starting DJ.

In the DJUCED software, it’s possible to link the 3 available effect banks and launch 3 effects at the same time using the Macro FX feature. If you choose to do this during a set, make sure you choose the right combinations, as it could quickly result in a mess!

The jogs are very robust and feel very solid, with a vinyl-like top coating. Nudging (slightly pushing the track forward or backward with the side of the jog) and basic scratching works really well. The tension is too stiff, however, for long backspins.

There are a series of small controls underneath the jog. On the right, there is a button to set the jog wheel to vinyl or nudge mode (which means you can use the top of the platter to nudge the track).

There is also a very basic loop section, with two buttons: Loop In and Loop Out. If pressed long, the Loop In button activates an automated, 4 beat loop, and you can reduce or increase the size of the set loop by pushing Shift + In or Shift + Out.

In the center and just under the jog, Hercules added a very smart feature called Beatmatch Guide and in this case, it indicated with two LEDs which way to nudge the jog wheel to match the playing track when mixing. This is a GREAT help for starting DJ’s (and for any DJ frankly) because it does two things:

More on the Beatmatch Guide feature later in the review, as this is not the only place it offers help.

To the right of the jog wheel, there is a SLIP button (this will allow you to play around with the track while the track itself continues to play underneath) and a Quantize button, which are very welcome additions, and not often seen on beginner DJ controllers.

The transport section on the bottom of each deck packs a lot of functionalities. There is a shift button, a sync button, and a decently sized CUE and PLAY button. There are also 8 performance pads per deck, supporting many performance features: HOT CUES, ROLL, SLICER, SAMPLER, TONEPLAY, FX, SLICELOOP, and BEATJUMP.

The pads are more than OK for this price level and feel good when in use. Again, the amount of performance options is remarkable at this price point. See the video below for a demo on how each of these options sound!

Finally, on the right, there is small but very functional pitch fader. Here, there is also help available from the Beatmatch Guide: when you load a track, two LEDs next to the pitch fader will show you if you need to pitch the track up or down to match the playing track’s BPM. The small size of the fader makes it a bit difficult to pitch precisely, but keep in mind you can adapt the range of the pitch fader in the software.

The Hercules DJ Inpulse 300 has a 2 channel mixer, and what goes for the decks, goes for the mixer as well: it has a remarkable amount of features for the price.

The browser section is simple but effective: two load buttons and a big browser knob. The browser knob has a bright LED ring that indicates the energy of the tracks in your music library. This is part of the Intelligent Music Assistant included in DJUCED and that can be activated with the assistant button on the Inpulse 300.

The button will open a separated suggestion list in DJUCED with suggested tracks that are color-coded according to their energy level, and will even suggest trending tracks. This is a great help for starting DJ’s, as it really helps them to discover matching tracks for maximum effect with the crows.

The mixer channels themselves have each a dedicated gain knob, LOW, MID and HIGH EQ knobs, and a filter button. In the middle, there is a master volume control and headphone volume control. There is also a CUE button per deck and a master CUE button.

Right beneath the master CUE, there is the Beatmatch Guide button. This button activates the jog wheel and pitch fader LEDs discussed earlier.

Finally, the Inpulse 300 has a master VU meter and per channel VU meters, line faders that feel good in use, and a loose (maybe even a bit too shaky) crossfader.

The Inpulse 300, being a beginner DJ controller, has a limited number of inputs & outputs. On the back, there is, as expected, a master RCA output and the USB port to connect the Inpulse 300 to your computer. There is also a Proprietary Hercules extension port for additional accessories that, I assume, will allow connecting additional gear to the Inpulse 300 in the future.

On the front, the Inpulse 300 has a single headphone jack.

What about the competition?

There are a lot of options if you have USD 200 to spend on a DJ controller. Pioneer DJ recently brought out the DDJ-200, which is a simplified version of the DDJ-400 with support for IOS djing. Numark has several controllers in the sub USD 200 price range that are interesting for beginning DJs as well.

The reason why I believe Hercules has such a strong offer with the Inpulse 300 and the Inpulse 200 is that for a very similar price, you get features & functionalities that will cost you at least USD 250 when looking at other brands. On top of that, you get the beat match guide and the assistant. And while the assistant is nice, the beatmatch guide is simply brilliant, because it really helps beginner DJ’s to nail down the basics of DJing in a fun, instructive way. It’s a very good way to learn to rely on your ears instead of sync buttons and BPM readouts.

If your budget doesn’t stretch enough to buy the Inpulse 300, or if you want something a little bit more basic, there is also the Inpulse 200. Costing only USD 99, it’s amazing value for money!

Obviously, some corners have been cut to be able to slash the price in half: smaller jogs, 4 pads per deck instead of 8, a 2 band instead of a 3 band EQ, no slip and quantize buttons… But the beatmatch guide and the assistant feature are still there, as well as the built-in soundcard!

At this price, it’s quite hard to find a better deal, to be honest.

I like the direction Hercules is going with their current line of DJ controllers. The Inpulse 300 and the Inpulse 200 both operate at the low end of the market but do that with remarkably mature products, that are well designed, well manufactured and above all, have features that make sense for the target beginner audience.

Adopting a more “classic” controller design will help Hercules to get noticed by a larger audience, and the revamped DJUCED software has also matured to the point that it can measure up to the established, mainstream packages such as Rekordbox DJ and Serato DJ.

I’m very much looking forward to seeing what Hercules will produce in the future, hopefully, they will move up the ladder and come with a mid-level DJ controller as well!