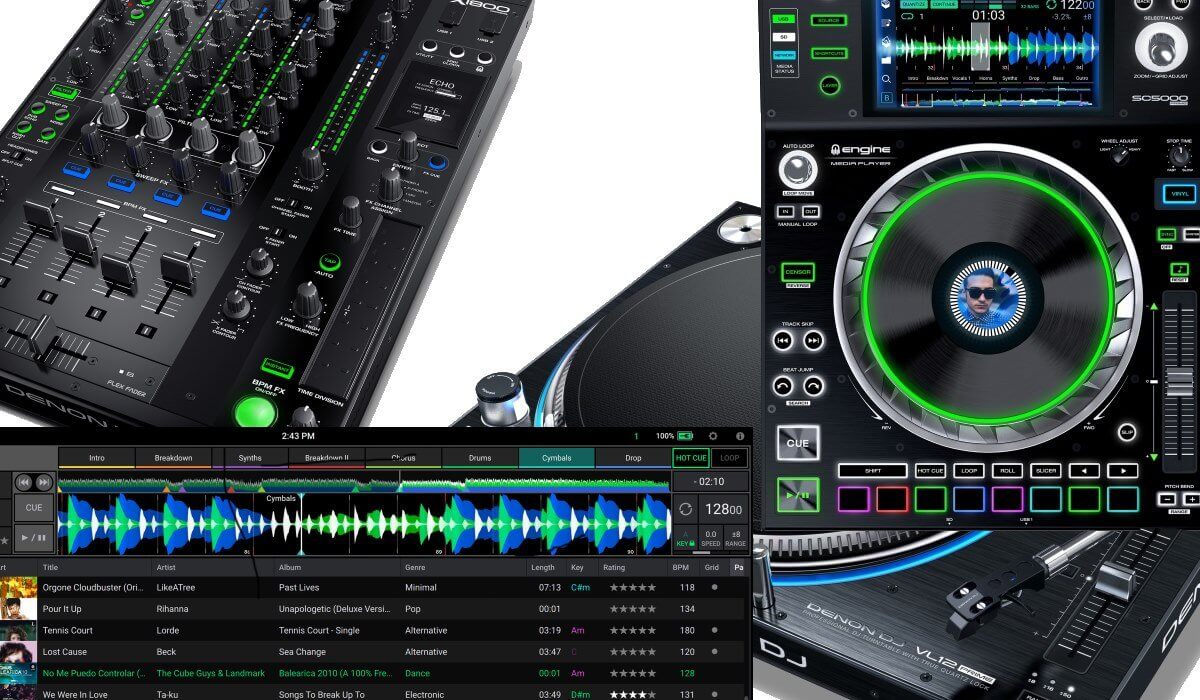 Denon DJ has opened up the floodgates and has unleashed their new premium DJ gear range. We are talking a lot of new shiny here just ahead of Namm 2017: A flagship media player, the Denon DJ SC5000 Prime, a flaghsip club mixer, the X1800 Prime and a turntable fully engineered in-house, the VL12 Prime. We reported about it on friday, and now we have the full details!

This should be the first and true competitor to Pioneer DJ’s Nexus series, complete with DJ media player, mixer and preparation software.

The SC5000 Prime, as already described last week in our coverage of the leaked information, is a top-notch media player, and frankly after going through a few of the specs, a truly revolutionary DJ tool.

One features that is described in the detailed presentation video below is that the SC5000 Prime can analyze tracks on the fly. This means that you can insert a USB stick with tracks that have not been prepared in Engine and the player will set beatgrids, BPM and so, on the fly. This is terribly powerful and a big time saver for Dj’s that don’t want to spend hours behind the computer preparing tracks.

All I can for now is… wow! The touchscreen looks truly amazing, and working with it a breeze. Expect a full video review as I get my hands on one at Namm next week! The price? Expect it to be around USD 1.899, which is a bit more than a comparable Pioneer DJ XDJ1000MK2, but with more features and far less than Pioneer DJ’s flagship CDJ-2000NXS2 which costs around USD 2.200.

There can’t be a premium media player without its corresponding premium club mixer, and Denon DJ has created the X18000 Prime to go along with the SC5000 Prime.

There is much to like here, and the effect section, double USB input and Engine Connect clearly show this mixer is here to compete directly with the Pioneer DJ DJM-900NXS2.

And finally, the hardware part of the Prime line is completed by the VL12 Prime turntable, and it’s build from scratch by Denon DJ. The LED ring around the platter gives it a distinct look, and Denon DJ claims the VL12 Prime to have the highest torque in the industry.

The Denon DJ V12 Prime turntable will retail at the very reasonable USD 899.

And last but not least, Denon DJ has revamped their Engine software to support the capabilities of the SC5000 Prime. This was a much-needed revamp since the previous version of Engine was underwhelming. Hopefully, this one will start to stand up to Rekordbox in a major way!

So it’s the 9th of January 2017, and we are already getting a good idea of what the DJ year will look like. Denon DJ is not kidding around here and they look like ready, with the support of InMusic, to finally claim a spot in the professional DJ booth. It will take a lot of blood, sweat, and tears to get there, but ultimately, it will be worth it. Having some healthy competition between Pioneer DJ and Denon DJ will push both manufacturers to continuously improve their professional products, and whatever happens on the top, always ripples down to the consumer (read DJ controller) end.