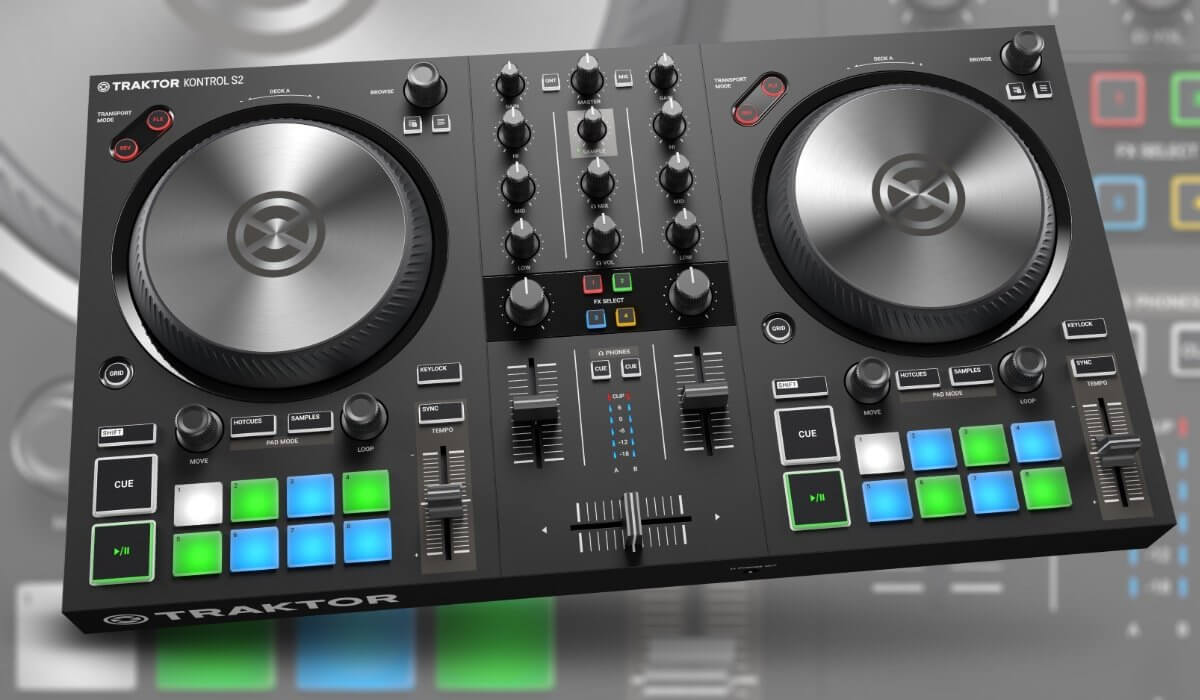 The Native Instruments Traktor Kontrol S2 MK3 is the newest incarnation of the entry-level controller from Native for beginners. It has matured quite a bit over 3 generations, and now it’s definitely a very well featured piece of gear when compared to other entry-level offers.

The controller is obviously made of plastic, but don’t let that fool you. It gives a sturdy and solid impression, and the jogs are truly great for this price level. The controller has 2 x 8 quality performance pads per deck and an effect section build into the mixer.

Taking into account that the Traktor Kontrol S2 MK3 is a beginner DJ controller costing a little over USD 300, the decks are well equipped and look the part. This is mainly due to the high-quality 8 performance pads per deck and the large aluminum jog wheels.

The jog wheels are smooth in use and have good size. Unfortunately, there is no haptic feedback motor build in like the S4 MK3, but considering the budget that is understandable. Overall I like their weighting and operation.

The performance pads fulfill a series of performance functions, and while they should be enough for any Dj’s needs, don’t expect all the choices you usually get on Serato or Rekordbox DJ controllers. Traktor Pro is much straightforward and offers two pad functions: control your samples or hot cues.

Looping is done with a loop encoder, and it’s my favorite way of creating and controlling loops. Simply rotate the encoder to adjust the loop size, and press the knob to engage the loop. There is also a knob to move the loop around once engaged, which is a cool feature.

When combining the loop encoder with flux mode (which allows you to manipulate a track, for example using the jog wheel while always jumping back to the same point you were before manipulating the track) you can recreate what in other DJ gear is called a roll effect.

The pitch fader is small but sturdy and works very well for even small tempo changes. On top of the pitch fader, there are sync and key lock buttons as well. The decks are no longer mirrored so you might have to adapt to that if coming from an earlier version of the S2.

The navigation happens with two separate encoders, one on each deck. I like this because it helps to keep track, in the heat of the moment during a set, for which deck you’re browsing.  Browsing and selecting tracks is very easy, just use the knob to browse and click the button to load.  You can also add tracks directly to your preparation list without touching your laptop.

The S2 MK3 has, as you noticed, no effect sections on the deck, but there is a Mixer FX section with 4 buttons that instantly activate the desired effect. You can select from 8 effects in the software and assign them to the buttons, and when the buttons aren’t pressed, the knobs on each channel activate the filter.

To me, this is a smart way of implementing effects into a beginner DJ controller. It creates a simple way of activating and using FX and avoids too much clutter on the decks. On top of that, starting DJ’s shouldn’t be fiddling too much with advanced FX options and rather focus on the basics.

The rest of the mixer is quite straight forward: On top, we find a gain knob per channel and the master volume knob in the middle. There are also two buttons: one to engage quantize (when engaged the software will snap the track to the beat when you trigger hot cues) and the other to engage the microphone.

Each channel has a 3 band equalizer with in the middle we can find the sampler volume knob and the mix and volume knobs for the headphone input.

Each channel has its channel fader that is small but sturdy and well-weighted, and in between the faders, the S2 MK3 has two VU meters, one for each channel input.

The Traktor Kontrol S2 MK3 has a very straightforward array of inputs & outputs: mic input with gain control, RCA main out, a USB port to be used with a connected iPad, the USB input to connect your laptop and the power connector. Do note that there is no power adaptor included in the box, you will have to buy this separately. On the bright side, the unit works quite well with USB power only.

The Traktor Kontrol S3 MK3 is an interesting controller from Native Instruments. Clearly geared at the beginner DJ, it’s very well thought out in order to set the entry barrier as low as possible. Traktor Pro 3 is complex software, but you don’t need to bother with that when using the S2 MK3 as all the main functionalities are easily accessible from the controller itself.

I wouldn’t recommend it to everyone that is starting out, but if your preference goes out to Traktor Pro as your DJ software weapon of choice, then the S2 MK3 is a great point of departure into the world of Traktor.