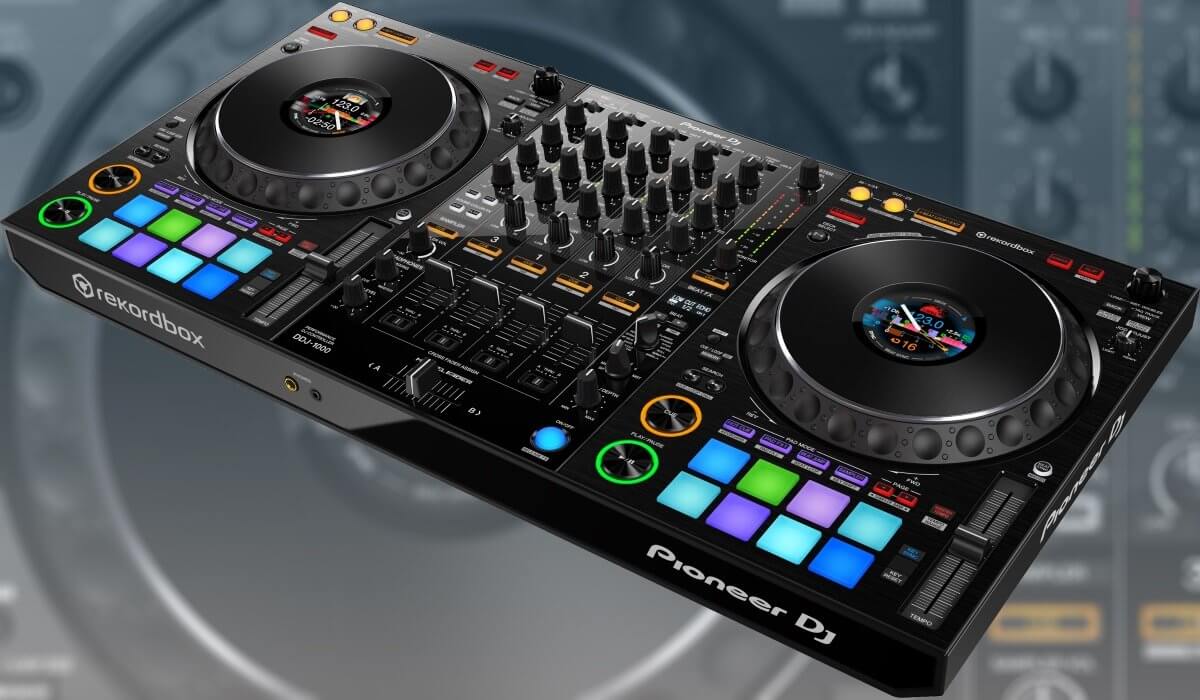 The Pioneer DJ DDJ-1000 is a game changer. It’s the first controller from Pioneer DJ to feature high-resolution LCD screens in the middle of the jog wheel. The idea is not new, Denon and Numark have come out with controllers and the Denon DJ SC5000 media player that have similar LCD screens built into the jog wheel. But Pioneer DJ goes a bit further and includes waveforms shown on the screens.

The jog wheels are the same size and type as on the CDJ-2000NX2. The mixer is a true mini DJM-750 MK2, with 4 channels, sound color effects and even on board beat effects.

Overall, the DJM-1000 makes the transition from DJ controller to professional club DJ gear much easier. As such, it’s the ideal controller to train on, if you can accept it still needs a computer to work.

The high-resolution LCD display manages to a show a lot of information on a small screen. Actually, while playing, you shouldn’t feel the need to look over to your computer screen at all. A few of the main functions of the display are the waveform, the BPM, time remaining, key, hot cues, selected deck, artwork, needle position… The only reason this screen isn’t perfect is that you can’t use it to browse your library, which is understandable, considering the size of the screen.

There is a jog wheel tension adjust knob as well, a nice addition that allows customizing the feeling of the jog further.

Overall, one of the best jogs on a DJ controller so far, and the screen is a truly practical feature that helps to keep your attention firmly locked on your gear and crowd, and not your laptop screen.

On top of the jog wheel, were the traditional effects sections usually is, the DDJ-1000 features a very CDJ-like loop section. I like the fact that Pioneer DJ decided to integrate this approach into a DJ controller because it makes it easier for DJ’s that use the DDJ-1000 to switch to a CDJ or XDJ player without having to go through a learning curve.

On the other hand, I believe that a rotary knob for setting loops like on the Denon DJ SC-5000 Prime or the brand new Native Instruments Traktor Kontrol S4 MK3 is a better, more elegant solution. I just wish Pioneer DJ would let go some design ideas that were innovative more than a decade ago but that have been improved upon since then. That being said, there is also a button for quickly 4 loop autoloop button.

On the top right side, there is the library management section. The DDJ-1000 has two sound cards, so each deck gets dedicated navigation controls. This certainly adds to the feeling of two decks and a mixer.

Finally, in this section, we also find buttons for slip, quantize, and (slip) reverse.

The bottom of the deck feels a bit more familiar and is more in line with other DDJ controllers. The CUE and PLAY/PAUSE buttons are exactly like those on CDJ’s.

The pads support an array of Rekordbox DJ performance functions: HOT CUE, PAD FX1, PAD FAX2, BEAT JUMP, SAMPLER, KEYBOARD, BEAT LOOP, and KEY SHIFT. Some of these functions are only accessible using the SHIFT button, and this button is quite small and pretty far from the pads. Ideally, the shift buttons should have been larger and/or closer to the pads, as switching between pads layer will happen a lot when performing.

Finally, on the right, sits the high-resolution pitch fader. The fader is large but looks (and feels) a bit cramped there, as Pioneer DJ had to squeeze some things together a bit to make the big jogs fit in this format.

The mixer on the DDJ-1000 is probably the most advanced mixer on any DJ controller so far. It’s a 4 channel hardware mixer with a Magvel crossfader, 4 channels that can switch between external inputs and any of the two available USB port, 4 sound color effects and a total of 14 beat effects.

It’s very comparable to a professional DJM mixer in design and functionalities, and if you are looking to get all the advantages of a professional mixer without the heavy price tag, this DJ controller is a very solid option.

On top, the mixer has simplified the switching between USB ports per channel. Now, every channel can be toggled between USB 1, Line and USB 2 with one simple switch. Much easier to use than on the DDJ-RZ, for example.

On the far left , the mixer has all the controls for the microphones, including an HI and LOW EQ. Each channel has large VU meters, with a 3 band EQ and a TRIM knob. On the right, there is the master level and the booth monitor knob.

The bottom part of the DDJ-1000’s mixer is a dream come true for effects fans, as you get on one side 4 sound color effects (D. ECHO, PITCH, NOISE, FILTER) and on the other, a BEAT FX section with a total of 14 beat effects:

These are all hardware effects, so they will work without a connected laptop. This means that if you have a DDJ-1000 and add two turntables or media players, the DDJ-1000’s mixer will offer you the same type of experience as a standalone DJ mixer. And that for a little over USD 1000.

The LOW CUT ECHO is particularly interesting, as it mimics the FX frequency feature on the DJM-900NXS2. It cuts the low frequencies from the echo effect, without having to touch the EQ’s. Really cool.

The DDJ-1000’s mixer looks and feels like an expensive standalone mixer from Pioneer DJ’s DJM range, and that’s an amazing feat considering the DDJ-1000’s price tag.

The DDJ-1000 has a professional array of inputs and outputs. There are 2 different master outputs: 1 X XLR and 1 X RCA. There is also 1 X TRS booth out. On the input side of things, the DDJ-1000 has RCA inputs for each channel and 2 MIC inputs.  Finally, the DDJ-1000 has double USB inputs to make it possible to connect two computers at once.

The DDJ-1000 is a fantastic addition to the DDJ controller line, form many obvious reasons: The great, full size, mechanical jog wheels with the practical LCD screens, the 4 channel hardware mixer with sound-color effects and beat effects, the double USB inputs and the very reasonable price are only a few of them.

The fact that the design of the DDJ-1000 takes so many cues from the DDJ/DJM line means that Pioneer DJ want to align the DJing experience within the Rekordbox ecosystem, making it easier for DJ’s to go from a controller to a pro setup and vice-versa.

The main issue I have with the DDJ-1000 is the usability. The jog wheels take so much space in this form factor (the DDJ-1000 is considerably smaller than the DDJ-RZ with similarly sized jogs) that all the rest feels a bit cramped, especially the pitch fader. So maybe we could have lived with slightly smaller jogs.

Another nitpick I have is that many buttons around the deck seem randomly placed, there doesn’t seem to much logic about it. But after a while you get used it, at least, I did.