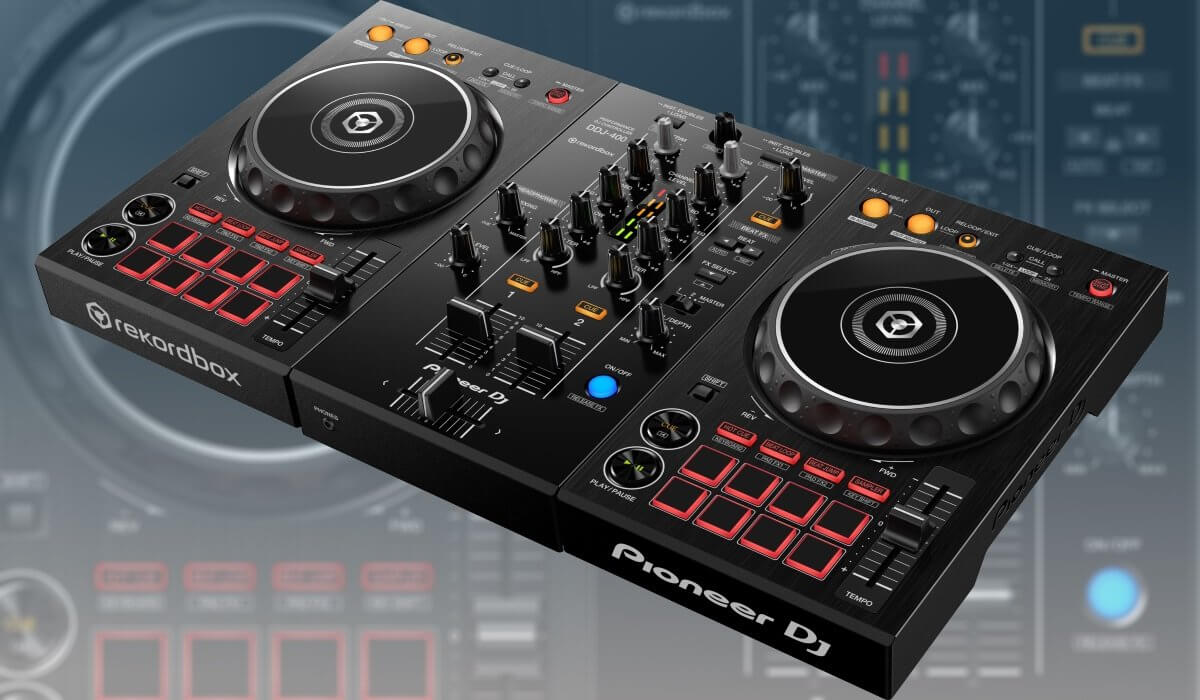 The DDJ-400 is the newest entry-level DJ controller from Pioneer DJ for Rekordbox DJ. It follows the same design language as the bigger DDJ-1000 and DDJ-800, meaning that the decks have a loop section instead of the traditional effects section on top, and the effects are now on the mixer.

Visually, it’s interesting, because it gives the DDJ-400 the “two decks and a mixer” feeling of far more expensive DJ controllers from Pioneer DJ’s professional DJM and CDJ line. Of course, the mixer effects are all software, since the mixer needs Rekordbox DJ to operate.

The DDJ-400 is quite well built, even if it’s plastic all over. The jog wheels are solid and feel good in use, and all the buttons and knobs have a solid feel about them, as usual with Pioneer DJ.

Let’s dive in a bit further.

The DDJ-400 comes with a nifty looping section that is very similar to the ones on professional XDJ’s and CDJ’s. The yellow buttons control the start and end of a loop, and by long pressing the IN button you get an automatic 4 beat loop, and the reloop/exit button does exactly its name says it does.

The cue/loop button has several functions, but the most important one is to cut a loop in half or double the size of a loop.

In all fairness, the multiple amounts of functions assigned to those two buttons can be a bit confusing if you don’t understand the functions behind it and considering this is a beginner DJ controller, that’s maybe something that Pioneer DJ could have uncluttered a bit.

The jog wheels on the DDJ-400 are very good and pleasant to use. They are well weighted but as always, the tension won’t be perfect for all techniques or for everyone. The rubberized sides are great for track nudging.

As on most DJ controllers, these jogs are touch capacitive, so the track will stop when you touch the top plate.

Overall, I like them, and they certainly feel right on the DDJ-400.

The performance and transport section

The DDJ-400’s performance section consists of 8 performance pads that can trigger 16  Rekordbox DJ performance features in total. The pads themselves are quite responsive and suitable for quick action but don’t expect the responsiveness of true velocity sensitive pads found on higher-end gear.

The features you can trigger with the pads are HOT CUE, BEAT LOOP, BEAT JUMP and SAMPLER for the first layer and KEYBOARD, PAD FX1, PAD FX2, and KEY SHIFT. I like them all, but I especially like the PAD FX. Since the decks don’t have effect knobs anymore, this is an alternative way of triggering effects if you don’t want to use the effects section on the mixer.

The pitch fader is significantly larger compared to the one on previous entry-level DJ controllers from Pioneer DJ. This is fantastic and an overdue change to their controller design that I have been ranting about for years. As a consequence, manual beatmatching is a far better experience than before.

The mixer on the DDJ-400 is, in essence, a very basic and software-based DJM mixer, with on the left the input controls, in this case, the headphone mixing balance and the headphone level. The mixing balance knob was missing from the DDJ-RB by the way, so it’s good to see it included here.

In the middle, there are the channel controls such as EQ’s, line faders and VU meters and finally, the beat fx section is located on the right.

This creates a familiar feel that beginning DJs will appreciate when they move up to a Pioneer DJ professional controller or a club mixer.

Of course, at this price point, you can expect some limitations.

The beat FX section triggers the Rekordbox DJ effects one at the time, and there is no built-in screen to see the details of the selected effect or to see the effects list. This is to be expected as no entry level control has this feature, but when using this DJM-like approach for the mixer it still feels a bit disappointing not to have it, because apart from having a different layout than before, you still need to watch your laptop screen to select the right effect and effect parameters.

In other words, I wish Pioneer DJ would have included a cheap LCD screen, that would really have added much more value to this change. Hopefully, this will be done for the next iteration!

Apart from that, it’s great to have that great blue button to activate and stop the effects, as it forces you to adopt a workflow that will be very similar once you move on to professional DJ gear.

The DDJ-400, being a beginner DJ controller, only has one RCA master output, a single mini-jack headphone output, and an unbalanced microphone input. That is not much, but it’s more than enough to get started. I do wish that Pioneer DJ would include an AUX input as standard in all their DJ controllers, because the moment you start DJing out, an AUX can be a lifesaver in many situations.

The DDJ-400 is a great way of getting started with DJing. The new design with the loop section on top of the decks and the effects moved to the mixer might feel unfamiliar if you have played on entry-level controllers before, but it makes sense since this is what DJ’s will encounter in professional decks and mixers as they move up the chain.

I like the performance pads, the jog wheels, and especially the decently sized pitch faders.

I do think that the looping section could be made a bit more intuitive in the future and that the effects section could use a rudimentary LCD screen to display the selected effect and set effects parameters without having to look at the laptop screen.

But those points are more ideas for future iterations of this controller than criticisms on the DDJ-400 itself, as any product needs time to evolve. On its own, it’s an excellent choice for any beginner DJ.