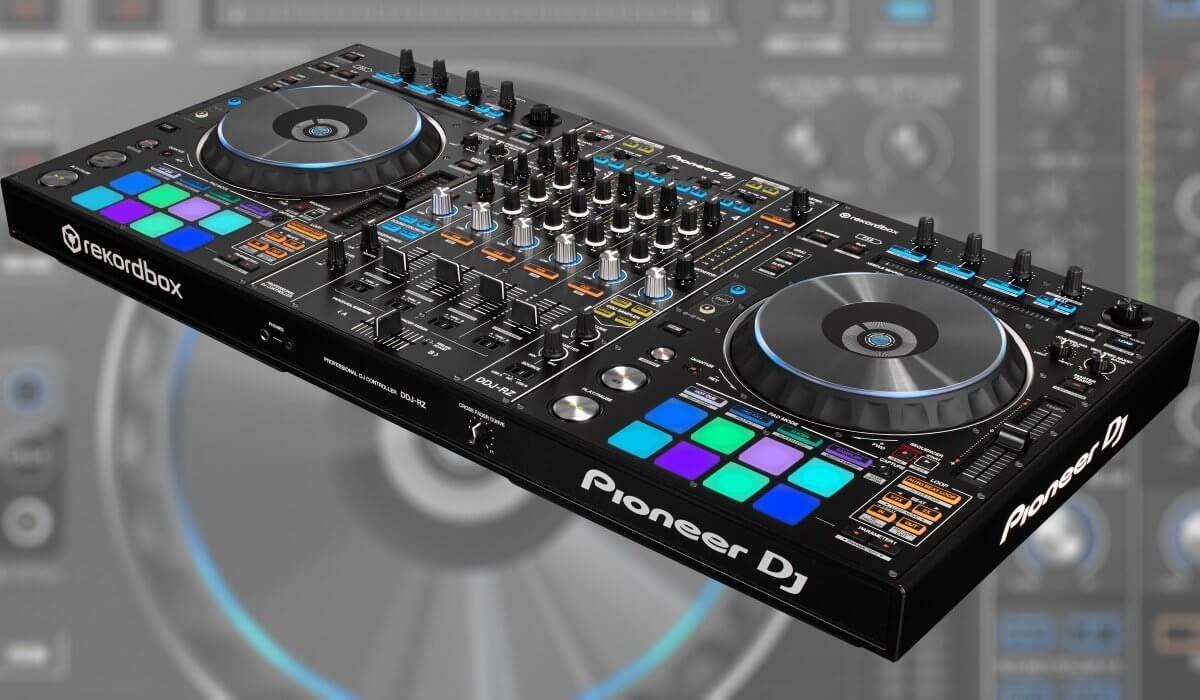 When the RZ came out Rekordbox DJ was in its infancy but today, with the arrival of Rekordbox 5.0, Pioneer DJ’s in-house DJ software seems to come to a point it can rightfully challenge Serato DJ on all fronts.

Which makes controllers like the RZ suddenly more interesting, as they are natively designed for Rekordbox and while mappings are available for other DJ packages such as Virtual DJ (and possibly Traktor Pro 2 as well), this will never be the case for Serato DJ.

All that being said, the DDJ-RZ works beautifully with Rekordbox 4.5 (at the time of creating this review Rekordbox 5.0 was still in beta) and you do feel the benefits of native support.

The controller itself is a big piece of gear, weighing 23 lbs (10 kg). Add the size/weight of a solid flight case and I guarantee you will have a hard time moving this one around on your own.

For all that effort, you do get the very best emulation of a full CDJ-2000NXS2/DJM-900NXS2 setup a DJ controller can offer, with full-sized jog wheels,  an (almost) DJM sized 4 channel, hardware mixer, sound color effects, double USB inputs… In all, you get the best Pioneer DJ has to offer, with the exception of the DDJ-RZX.

If reading through the review is just too much effort, check out the video review below!

There is much to discuss, so let’s just dive in!

The DDJ-RZ comes with all the buttons and knobs you need to control Rekordbox DJ: 3 knobs to control up to 3 effects at the same time, and a fourth push knob that controls the number of beats for the effect, plus it activates the Release FX. The effects are, unsurprisingly, high-quality and having actual knobs to turn is pleasant, although not the only way to launch effects on the RZ as we will see further down. There is also an FX panel button to switch between the different effects views in Rekordbox DJ.

The RZ comes with 2 USB inputs, thus two USB interfaces. A benefit of this, besides making DJ changeovers much easier, that each deck has it’s dedicated browser section, which is clearer and contributes to the “CDJ/DJM” feeling of this controller.

Finally, there is touch strip right under the effects sections, which makes track browsing a breeze.

If there is something that really attracts all the attention here, it must be those jog wheels. Exactly the size of those on Pioneer DJ’s high-end professional CDJ-2000NXS2, it definitely looks the part. It also feels the part, and with both jog feeling and vinyl speed adjust onboard you can make them behave and feel exactly as you wish.

They are made of aluminum with a rubber side, and the top is touch capacitive, meaning that a simple touch will stop the track. This is different than on the CDJ-2000NXS2, which are mechanical and require pressure to jump into action. I prefer the RZ’s jog wheels, but that is a personal preference, as many DJ’s prefer the mechanical feel of the CDJ’s.

The performance section on the DDJ-RZ is familiar territory for familiar with the Pioneer DDJ range, both the Serato DJ as the Rekordbox DJ versions. 8 high-quality, touch-sensitive RGB colored performance pads per deck, CDJ like cue and play/pause buttons, loop section…

The pads allow to play around with the vast performance options in Rekordbox DJ, and there are many. My favorite is Pad FX, a combination of slip roll of different beat sizes and effects activated by the pads. Great to launch effects in a quick way.

Finally, the RZ has controls to capture loops into the sequencer and play clips. Unfortunately, those buttons seems a bit shoehorned in at the right bottom of each jog wheel.

After the jog wheels, the DDJ-RZ’s mixer is my second favorite part of this controller. It’s spacious, well built and feels like playing a professional DJM mixer. It’s, of course, a hardware mixer so it supports Rekordbox DVS. Adding media players or turntables to the already rather large DDJ-RZ will be a challenge for any normally sized DJ booth, but if you have the room and the cash, don’t hold back!

The mixer on the DDJ-RZ feels like a professional mixer, with enough room between the knobs and loaded with features that are usually present on much more expensive stand-alone mixers.

The DDJ-RZ’s mixer has 4 different color effects: Space, Jet, Pitch, and Filter. The Pitch effect is a bit of a miss here, and now that Rekordbox has advanced pitch bending functionality through the performance pads, a pitch sound color effect feels rather obsolete. Luckily, you can change that and map the sound color effects to another one. Keep in mind this will only work when using Rekordbox DJ, so when you plug-in media players and/or turntables, the DDJ-RZ will default back to the standard sound color effects.

There is also the OSC sampler, with 4 oscillator sounds that could come in handy: Noise, Sine, Siren, and Horn. It’s possible to customize these sounds and put your own samples behind each button if you would prefer to do so.

Finally, the DDJ-RZ has everything a top-end DJ controller mixer should have: high-quality faders and crossfader, full 3 band EQ on each channel, large channel VU meters with separate master VU, booth and master volume levels… Close your eyes and you won’t know if you are on the RZ or on the latest DJM mixer!

The USB controls on the very top allow assigning channel pairs to USB A or B, making DJ changeovers easy.

Finally, the DDJ-RZ is well equipped with a generous amount of inputs & outputs. There are two microphone inputs, and the mic controls are on the mixer, including a 2 band EQ. On the back, the RZ has XLR and RCA master out, TRS Booth out, RCA inputs for each channel with grounding on channel 3 and 4 for turntables. Finally, there are two microphone inputs and 2 USB inputs.

It’s big, it’s expensive, but it is also…very, very good. It’s hard to dismiss the DDJ-RZ as just a copy/paste of the original DDJ-SZ, even if that is exactly what it is.

As the central hub in a semi-professional Rekordbox/ Rekordbox DJ setup, the RZ is a sound investment. The jog wheels and mixer are superior to the ones on the DDJ-RX, and while it’s big and heavy, it is still portable. As long as you have some help to carry it around.

A full 1000 dollars cheaper than the DDJ-RZX, largely because of the lack of built-in screens (and some other rather nice features). So if you are about to spend serious money on a Rekordbox DJ controller, is it worth going the extra mile and go for the RZX? I would say, only if you are going to use the RZX to its full potential, and that means… Rekordbox Video. If not, go for the RZ.

The DDJ-RZ is enough if you don’t need the visual Rekordbox Video capabilities of the DDJ-RZX. The screens are otherwise not worth the price bump of 1000 USD.

With Rekordbox 5.0 out, it’s possible now for DJ’s to plugin their Rekordbox USB sticks into any laptop running Rekordbox DJ and use any connected Rekordbox DJ controller. This will certainly help make a controller setup more popular with CDJ DJ’s since they can play from their usual libraries. And on the RZ, they would feel right at home, and probably marvel over the nice colored pads 🙂

So if you are buying this controller to share it with DJ friends, be it at a club, mobile DJ business or other, you won’t be disappointed. It’s, in my view, as good as having a DJM/CDJ rig, but at half the price, and minus screens and some other commodities.

Hopefully, we will soon see some sort screen expansion unit from Pioneer DJ, such as the Numark Dashboard, to expand Rekordbox DJ setups with screens.