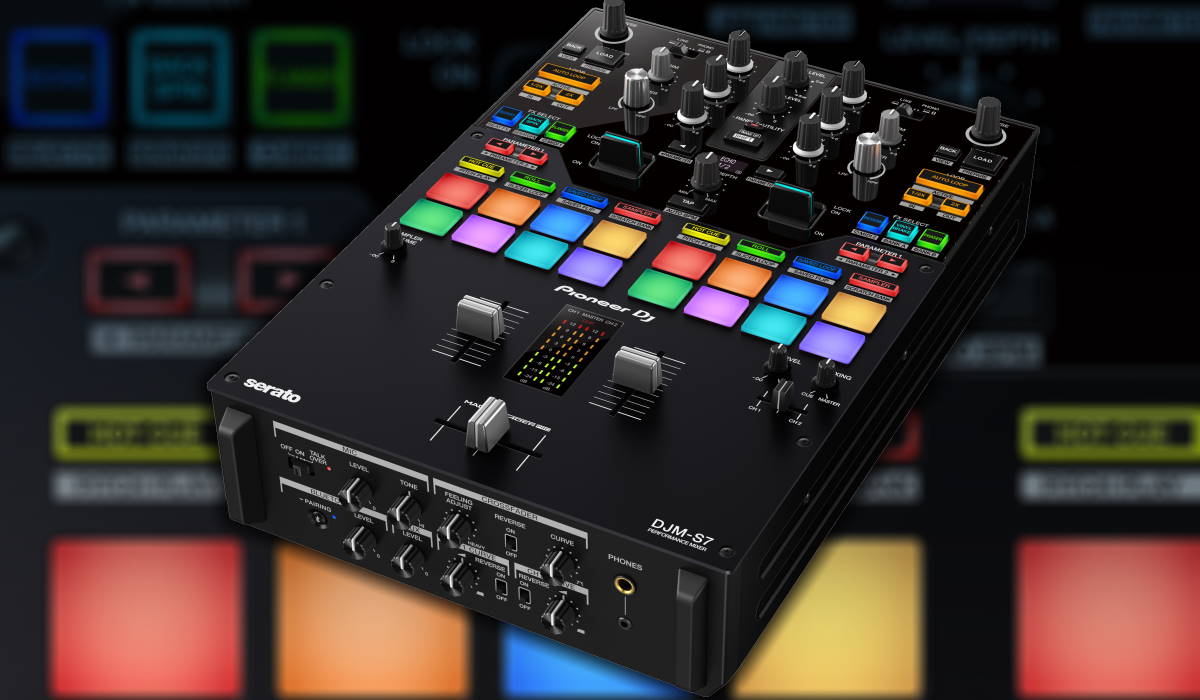 The Pioneer DJ DJM-S11 is a very significant upgrade over the aging Pioneer DJ DJM-S9.  The clearest addition is the inclusion of a 4.3-inch color LCD screen. The other clear change is the fact that the S11 is longer than the S9, as a result of the added screen, and this allowed Pioneer DJ to put all the channel knobs in one row, which feels much more familiar. The browse knobs are larger on the S11, and finally, the performance pads are now controllable per channel.

The S11 is a solid block of metal, and everything is screwed on solidly. This mixer is built to resist the hardships of being on the road, which comes as no surprise considering the price of USD 1999.

More recently, Pioneer DJ released the DJM-S7, a smaller, more compact, and most importantly cheaper version of the DJM-S11. Considering the S9 is still on sale and the entry-level DJM-S3, that means that Pioneer DJ now has a rather complete offer when it comes to battle mixers.

Let’s dive into the details of the S11!

The channel controls on the DJM-S11 are really well laid out and an improvement over the DJM-S9. The trim, EQ, and filter knobs are all laid out in a single file, making them easier to use. the browse and load section has a bigger load button than before, which limits the chance of hitting the wrong button when trying to load a track. Finally, the looping section is simple but effective, with an autoloop button and buttons to cut your loop in half or double it.

The screen is the central command of the mixer, and it has many functions. The screen is 4.3 inches in diameter, and is, considering its small size and a large amount of functionality, very well laid out.

The default view, shown above, is the waveform view, showing two vertical waveforms and other key settings such as BPM, sync status, key lock status, etc. Pioneer really made optimal use of the available space to pack as much information as possible.

The DJM-S11 allows you to control decks 3 and 4 directly from the mixer. The controls for the extra decks are quite extensive (EQ’s, sync, pitch bend, loops, hot cues…) and allow you, in theory, to have a 4 deck setup with only two physical decks. In theory, because in practice I would consider using this only in emergencies or occasionally since the control surface is small. There is another use for it though: the deck move and dual deck features.

The dual-deck and deck move features allow you to move decks around but also to link both decks and control them together. This means you can use deck features (hot cues, effects…) in sync across these two decks, which opens up a lot of creative possibilities.

The effects setting screen is where you can tune up to 4 banks of effect combinations. The DJM-S11 offers a total of 22 hardware effects. Add to that the software effects and the possible combinations of different setups for your 4 banks are almost endless.

We will go further into the effect possibilities of the DJM-S11 further down this review.

The DJM-S11 features 4 banks of midi settings, such as key lock, key up, key down… This helps you again to avoid having to use your laptop when playing. Each bank has a specific focus (key management, internal mode management, sync management…).

With the touch FX options, you can apply combined effects on a X/Y pad by simply moving your finger around. You can obviously change the effects on each axis. I think this is a cool feature, but I also feel the result isn’t smooth enough, caused by the screen’s low resolution and responsiveness. Do the same thing on a decent tablet and the feeling (and resulting effect) is much better. On the other hand, it’s nice to have it here, and it can be a cool way to add some spice to your mix.

The effects section is a key part of the DJM-S11. On the left side, there are 6 hardware fx buttons (which come with the mixer) and on the right side, there are six more software fx select buttons. When connected to Serato DJ Pro, however, you can customize the effect behind each of the twelve buttons with any of 22 available effects, and that straight from the mixer’s screen!

The available effects are:

To control the effects, the DJM-S11 has paddles to switch them off and on. This should be the only way to activate effects on any DJ equipment to me, so natural it feels to me to use them.

The greatest thing about the DJM-S11 compared to the DJM-S9 is that each performance section can be now controlled individually.

The performance pads are also larger than on the DJM-S9, making them very comfortable to play with. When using Serato DJ Pro, you have up to 4 modes you can set the pads in, including a mode that allows you to assign your own function to each pad.

The scratch bank feature is a clever way to instantly load a track (or a scratch sample) by simply hitting a performance pad. The difference with the classical sample bank, which loads tracks into the sampler, the scratch bank loads tracks directly into deck 1 or 2, giving you full deck control over the loaded track.

The smooth echo feature, located under the sampler volume knob, is an impressively handy little button. It allows adding an automatic echo out effect on virtually any type of action (close a fader, close the crossfader…) so that you no longer need to activate the echo effect manually.

Using the configuration screen, you can customize the behavior of the smooth echo button to trigger after a specific amount of beats, on a specific action… It’s a small feature, but for performance DJ’s, a very important one!

As expected, the DJM-S11’s front panel is filled with controls for your microphone, the crossfader adjustments, the AUX level, and channel curves. Everything is well placed and easily accessible on touch.

On the back, the DJM-S11 has all the necessary outputs and inputs. There are even USB inputs to connect CDJ’s directly to the mixer, to use them in a DVS setup.

The Pioneer DJ DJM-S11 is an impressive performance-oriented mixer and a worthy upgrade from the DJM-S9.

Of course, this mixer is primarily aimed at scratch DJs, that do things that mere mortals only can dream of being able to do. But I would buy one of these, even if my scratch abilities are close to (or below) zero, simply because of the screen, performance pads, effect options, and versatility it offers.

It’s an amazing mixer for those that like to play around with effects and performance features, and don’t need more than two channels.

At USD 1999, it doesn’t come cheap, but that’s the price to pay for the Pioneer DJ brand name. And to be honest, they deliver. This mixer is built like a tank and will last for a long time.