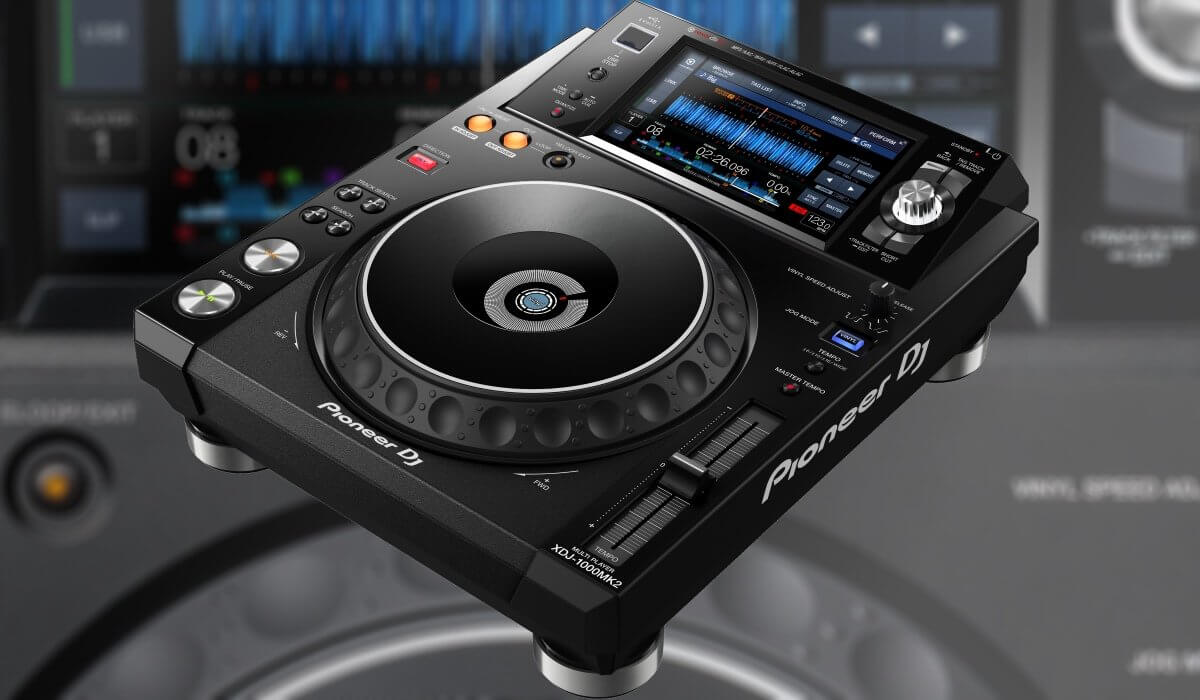 Having reviewed the Pioneer DJ XDJ-700 a few months ago, having a go at the Pioneer DJ XDJ-1000MK2 didn’t bring many surprises. The concept is the same, and the functionality, with a few notable exceptions, is largely very similar.

The big difference is, of course, the format. The XDJ-1000MK2 is a full-size media player, roughly the same dimensions as any Pioneer DJ CDJ/XDJ player. this makes it fit nicely in a professional club setup. It has a full-sized jog wheel, with a center LCD screen, and there are a few more physical buttons around the screen than the XDJ-1000 and the XDJ-700.

These are great improvements, but do they justify an upgrade from the XDJ-1000, or even from the XDJ-700? Let’s find out!

The touchscreen on the XDJ-1000mk2 is the same one as on the CDJ-2000nxs2. Also inherited from the nxs2 are the 4 navigation buttons surrounding the browse knob, which makes it easier to do certain (much used) actions without having to go into the screen.

The screen is the main interface with this player. It gives access to your library, tagged tracks, the track info screen, the utility menu and the performance mode. More on that later.

Browsing through your tracks is a breeze, and since this is a touchscreen there is a qwerty keyboard available to quickly search your library. The filter button on the right gives access to the great filter options in Rekordbox, allowing you to filter your track by color, star rating, key, bpm… There is also a matching feature that suggests new tracks based on tracks you played before.

Overall, the screen and surrounding area are a big improvement on the XDJ-1000, mainly because of the added physical buttons.

The performance mode gives access to hot cues, hot loops, beat jump and beat loop functions software DJ’s have known and have used for years. The XDJ-1000mk2 will save your cue & loop edits to your USB stick so these can be synced back to your library afterward. The screen reacts in the same way as the XDJ-700: responsive enough to be usable, but nothing compared to using real performance pads.

And that is where the DDJ-SP1 comes in.

It’s now possible to hook up a Pioneer Pro DJ DDJ-SP1 DJ Sub-ControllerDDJ-SP1 to your XDJ-1000mk2 setup and use it to control all the performance features of the player. One SP1 can control up to 4 Xdj-1000mk2s. This is really great and truly expands on the potential of these players, as performance pads simply feel better than touchscreen buttons. Of course, you need to factor in the cost of a DDJ-SP1: around 300 USD.

The jog wheel and its surrounding area are almost identical to that of the XDJ-1000, with the only difference the different finish on the jog wheel itself.

The silver strip around the jog doesn’t really add anything functionality wise though. I don’t like the vinyl speed adjust knob since it controls 2 different things with 1 knob: the record start & stop speeds. This is confusing since usually, these are two parameters that need separate control. It would have been even better to have the knob only control the stop speed, as this the one most DJ’s will probably play around with.

The Pioneer DJ XDJ-1000mk2 has a host of outputs. There is, of course, the traditional RCA out, but this player also has a digital output. If you happen to own a mixer with digital inputs, you will be able to connect your player digitally to your mixer, removing one digital to analog conversion from the audio chain.

Furthermore, there is a Pro DJlink ethernet connection to hook up multiple players together and play off 1 USB stick. Lastly, there is a USB port to connect the player external gear, such as a laptop, or the previously mentioned DDJ-SP1.

When hooked up to your laptop running Rekordbox through USB, it’s possible to use your Rekordbox library directly with the XDJ-1000mk2. This is very handy, as it puts little demand on the laptop (it’s acting basically as a giant USB stick), and you have access to your entire library and all playlists without having to export it to a USB stick.

But you can also use your XDJ-1000mk2 as a midi controller for Rekordbox DJ and have it run in HID mode. The player’s screen will then mimic what is happening on the laptop screen and you will have access to all the performance options of Rekordbox DJ.

If you want to see all of this in action, check out the video below for a demonstration.

The XDJ-1000mk2 is a great addition to the Pioneer DJ XDJ range, and really does a good job of offering top of the line media player functionalities, previously only found in the nexus range of players, for half the price. USD 1.200 is still quite the cash for a single media player, but considering the CDJ-2000nxs2 costs twice as much, investing in a pair for your professional home setup is a smart move.

But what about the XDJ-700, which is almost half the price of the XDJ-1000mk2? In my opinion, the 1000mk2 is worth the extra cash. The large jog wheel, the expandability with the DDJ-SP1, the additional physical controls… Combined with the support for high-resolution audio formats and the digital output, it does bring the XDJ range into professional terrain at a reasonable price.

It will be interesting to see if Denon DJ, after bringing out the SC5000, plan a mid-range player to compete with the XDJ range.