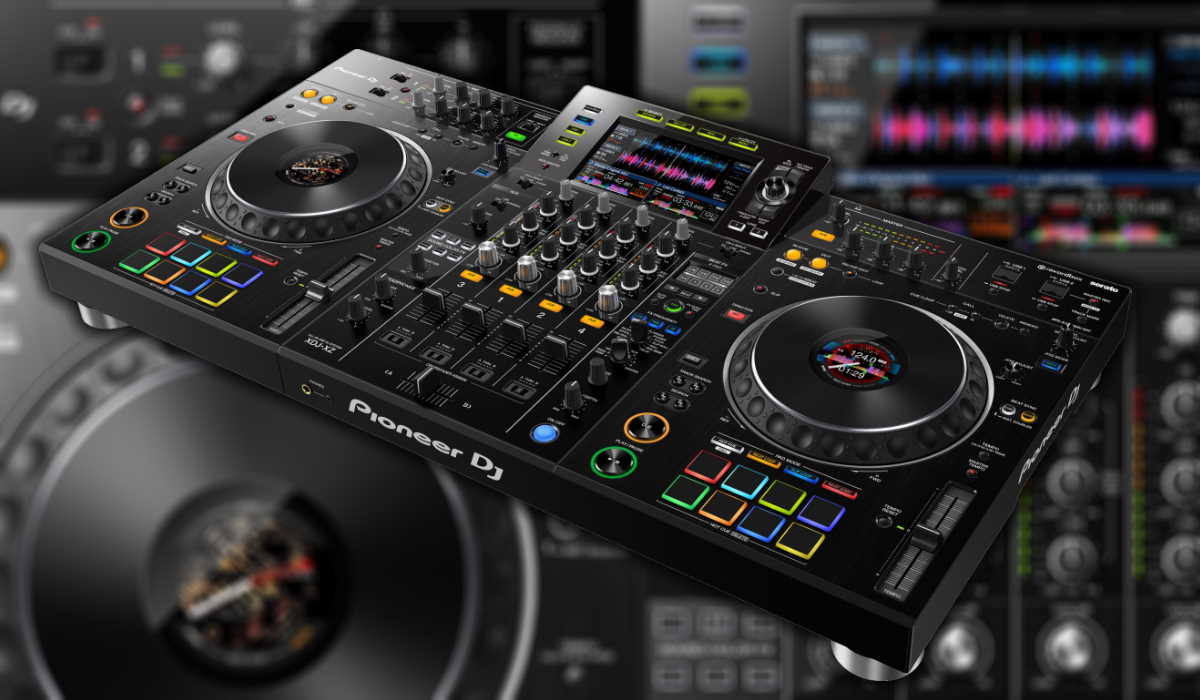 The Pioneer DJ XDJ-XZ media player is the latest professional media player from Pioneer DJ, delivering a complete DJing solution in a compact package: 2 CDJ-style decks, a fully-featured DJM-style mixer, and plenty of inputs and outputs.

The unit is, as expected, well build and solid. It’s big, but that’s hardly surprising considering it has a 4 channel mixer onboard and full-sized jog wheels.

One of the weaker points is the screen. It’s good enough for sure, but this being 2021, (or even 2019 when it was launched), it’s reasonable to expect a more advanced screen to be fitted. Still, the screen does its job perfectly well and serves its purpose.

Let’s start with the decks. These are basically a combination of what you find on the CDJ-3000 and the DDJ-1000. In other words, you get the best of both worlds: a CDJ-like deck layout with the added versatility of 8 performance pads per deck. The pads are not as high-end as on the DDJ-1000 (more on that later) but they are qualitative enough.

The looping features on the XDJ-XZ are classical Pioneer DJ: loop in & loop out buttons, a re-loop/exit button, and the instant 4 beat loop button. There also buttons to call up stored loops and cut/double your loop.

[start rant] I have said this a thousand times, and I will say it a thousand times more: i wish Pioneer DJ would finally simplify their loop workflow and adopt a more intuitive approach. It’s just too many buttons with too many functions, in my opinion, and it just feels to me Pioneer DJ isn’t upgrading it because it’s afraid of offending DJs that have been using CDJ’s since the start. [/end rant]

The jogs are really, really, good. These are full-size jog wheels, with a center LCD screen that displays a wealth of track information, and with jog tension, adjust and vinyl speed adjust controls for all the control you need.

The jog wheels are mechanical, which will be appreciated by DJs that are used to this. Personally, I’m happy with both mechanical as touch capacitive.

Finally, the jogs have tension and speed adjust, which allows you to configure them exactly as you like them.

The pads aren’t of the velocity-sensitive, fully backlit type you find on high-end DJ controllers, but they will certainly do the job. I was one of those expecting Pioneer DJ to add a similar pad section to the CDJ-3000, and I was slightly disappointed they went with hot cue buttons under the display instead.

The pad section contains 4 modes: HOT CUE, BEAT LOOP, SLIP LOOP, and BEAT JUMP. This work very much as they work on any DJ controller, and having physical pads to use these performance features, (compared to using the touch screen on the CDJ-3000), is, for me, a true advantage, and if you are into performance tricks, the pads will be a big plus.

The screen is definitely not the showstopper on the XDJ-XZ, but when you get past its limitations, it’s more than adequate for the job. It’s 7 inches in size, and it shows both a large version and a smaller version of each decks waveform. Keep in mind that although the media player has a 4 channel mixer, the screen won’t show 4 waveforms. In standalone mode, only 2 channels are available.

The screen is touch-enabled, but don’t expect to have support for advanced touch functionality, such as pinching to zoom waveforms. The touch enablement is basically the same as for previous media players from Pioneer DJ: browsing and searching tracks, activate and deactivate functionality… Not a big problem, but it would be cool to be able to do more.

The surrounding screen controls are clear and easy to use. The rotary knob is great to use in combination with the touch controls, and if you are a seasoned Pioneer DJ user, you will find yourself right at home using it.

The Pioneer DJ’s XDJ-XZ’s mixer is a truly complete solution. It looks and feels like a full-blown club mixer, with (almost) all the bells and whistles you have come to expect from a professional piece of gear.

One point of criticism could be that all the knobs and faders are squeezed closely together, as a lot of features are packed within limited amounts of space. But that’s something you get used to quickly once DJing.

Each channel obviously has a 3 band EQ, a dedicated sound color FX knob, and high-quality faders. Channels 3 and 4 will not be available when using the unit in standalone mode unless you plugin external gear. This was a big disappointment when the XDJ-XZ launched end of 2019, as competing units did offer 4 channel standalone support.

Above the left deck, the XDJ-XZ has all the controls for the two microphone inputs. Each input has an on/off switch, a level knob, and a full 3 band EQ. There is also a talk-over button to mute the master channel instantly and a new feedback reducer feature to avoid that horrible mic feedback that can kill the vibe in an instant.

Above the right deck, the XDJ-XZ has the MASTER controls, which include a full 3 band EQ for the master channel. This is a very clever and useful addition, as it allows to correct the sound for all the channels at once and set an EQ base level for a specific sound system/venue.

There are two USB slots for mass storage, one of them can also be used to record your sets directly to a USB stick. Again, very useful as it avoids having to carry around a separated recorder.

Finally, we come the inputs & outputs on the back. The XDJ-XZ is, as expected, equipped with a professional array of connectivity:

Overall, the Pioneer DJ XDJ-XZ is a well-equipped piece of professional DJ equipment. It comes at a price, and there are alternatives on the market that are cheaper yet technologically more advanced.

But if you are embedded as a DJ in the Pioneer DJ ecosystem (Rekordbox, CDJ’s…) then the XDJ-XZ is a highly competitive alternative to a pair of CDJ’s and a DJM mixer. Basically for less than the price of a single CDJ-3000 you get a full CDJ/DJM system. It’s obviously not the same thing, but it comes pretty close.