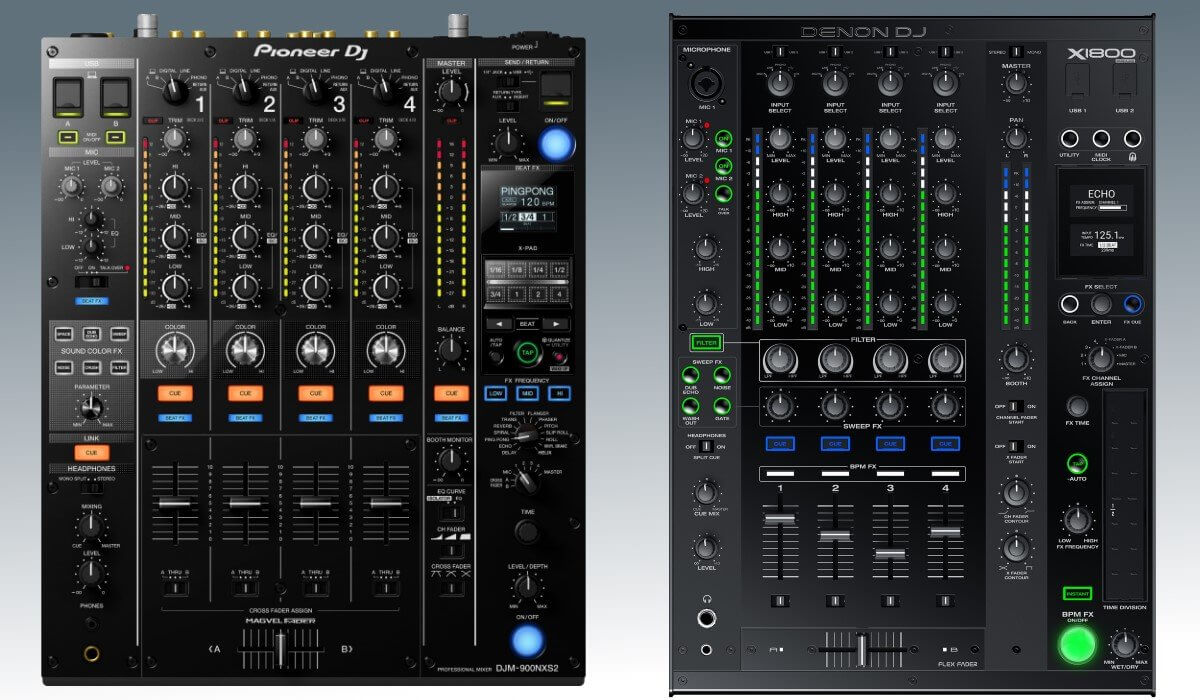 A few days ago we looked at the Pioneer DJ CDJ-2000NXS2 versus the new Denon DJ SC5000 Prime media player.

Today I want to dive into the hearts of both the Prime and the NXS2 system: the Denon DJ X1800 Prime and the Pioneer DJ DJM-900NXS2 mixers.

While most of the spotlight, at least marketing-wise, goes to the players, the mixers are really at heart of any DJ system, and when it comes to top of the line professional setups, the mixer is really what brings all the elements together.

I’m not looking to fully review both units in detail, that will be the subject of future articles. Here, I just want to look at the main features of both mixers and see how they compare. In all fairness to Pioneer DJ, the DJM-900NXS2 has been on the market for over a year while the X1800 was released in January 2017, so Denon DJ has a (slight) advantage compared to Pioneer DJ.

As with the media players, the mixers differ in size. The X1800 is deeper than the 900NXS2, in order to accommodate the vertical effects touch strip and the per channel knob for the sweep FX. At the same time, the 900NXS2 is significantly wider.

The channels: EQs and source selection

The DJM-900NXS2 has a 3 band EQ section per channel that can be set to classic EQ or to isolator EQ. In the last setting, the EQ’s are full kill. The source selection is pretty straightforward and allows to switch each channel between USB 1 or 2, Digital, Line, Phone and Return Aux. The last setting means that it’s possible to send the return path of an effect to any of the 4 channels, which is pretty cool.

One of the things that make the DJM-900NXS2 stand out are the small improvements based on the input of top Dj’s that work together with Pioneer DJ. One of those improvements is the clipping indicator on each channel, to prevent Dj’s to go in the red. Yes, indeed, for some DJ’s the VU meters are not enough…

A central feature in modern club mixers are the effects. Top end mixers like these two usually have multiple FX modules.

The DJM-900NXS2 has two different modules, the sound color module and the beat FX module (discussed later). The sound color module has 6 different effects: Space, Dub Echo, Sweep, Noise, Crush and Filter. They are activated by a dedicated knob on each channel and what is extremely cool on the NXS2 (and on the DJM-450 that we reviewed recently) there is also a parameter knob that allows manipulating certain characteristics of each effect.

The X1800 Prime has a similar approach with the Sweep FX. There are 4 of them: Dub Echo, Noise, Wash Out and Gate, and they have a dedicated knob on each channel. The difference with the 900NXS2 is that the filter knob is a separated knob, which allows combining the Sweep FX with the Filter at any time.

I like this as I always found it annoying having to check the color FX to make sure it was set to filter when I want to use it on my DDJ-RX. I use the filter in a very intuitive way, and it’s usually a split second decision to apply it to a single beat…

Considering the DJM-900NXS2 came out a year before the X1800 Prime, it’s easy to see that Denon DJ borrowed with pride, as both faders & crossfaders sections are virtually identical. And this is a very good thing because the led that indicates if a beat FX (Denon DJ calls it bpm FX) is active on a given channel is extremely useful.

A very cool feature of the X1800 Prime, when combined with the SC5000 Prime, is that the cue button for the channel assigned to a player takes the color of the player’s jog wheel led ring.

So if you are using the dual layer feature on the SC5000 it will be easy to see which channel is linked to which player’s layer. Cool!

This is where things get really interesting. The DJM-900NXS2 has a very advanced beat FX section. Two things stand out here: the x-pad that allows to instantly jump to a certain beat for a given effect, and FX frequency, that allows applying a certain effect only to a certain frequency (hi-mid-low).

This is fantastic because it makes it much easier and effective to apply effects subtly without having to use the EQ’s (which tends to drop the volume and energy as well). The DJM-900NXS2 has a full suite of FX, selectable through a knob.

The X1800 Prime has very similar functionalities but implemented in a different way. The effects are only selectable through the OLED screen, not via a knob.

Instead of the x-pad, the X1800 Prime has a touch strip that allows DJ’s to subtly navigate through different beat settings on an active effect. There is also a knob to define the frequency of the active effect, not sure at this point if it works in the same way as the FX frequency buttons on the DJM-900NXS2.

Both mixers have FX send & return capabilities, with the DJM-900NXS2 taking the edge here with the possibility to route the FX return channel to any of the 4 available channels.

Besides all that, there are inputs & outputs for external effects send & return. The mixer has two USB inputs for easy DJ changeovers, two microphone inputs, and a double jack headphone input. Finally, there is also a LINK Ethernet port to link several CDJ players together.

The X1800 Prime has, again, a very comparable stack of inputs & outputs. A big added bonus here is the 4 port USB hub, which allows to connect up to 4 players directly to the mixer and share bpm/library track information from 1 single USB source.

The CDJ-900NXS2 has been credited to have warmer, fuller sound than its predecessor. Responsible for this improved sound quality is a new 96 kHz/64-bit digital signal processor. The mixer also has a 96 kHz/24-bit built-in soundcard that adds DVS capabilities. To this day the CDJ-900NXS2 is DVS compatible with Rekordbox DVS, TRAKTOR SCRATCH PRO 2 and Serato DJ.

The X1800 Prime has a built-in 96 kHz/24-bit soundcard, and we know for a fact that Serato DVS compatibility is coming soon.

The DJM-900NXS2 is a very powerful mixer, and through several iterations, it has improved every time adding features that DJs have requested over the years. The sound quality is superb and the DVS support for Traktor, Serato and Rekordbox DJ is a big plus.

Does that make te X1800 inferior? Probably less refined on a few details, yes, but still a fantastic and professional DJ mixer that benefits from the decades-long Denon DJ experience in making top of the line DJ gear.

While the X1800 Prime is not going to be considered club standard right off the bat, it’s undoubtedly one of the best professional 4 channel DJ mixers at the moment. It matches the features and functionalities of the DJM-900NXS2 almost one to one and adds a few smart details to that in the process, such as the 4-way ethernet hub on the back, or the color-coded cue buttons to match the SC5000’s jog wheel led ring color.

The DJM-900NXS2 was clearly well looked at by Denon DJ when creating the X1800, and that was a smart thing to do since the 900NXS2 is probably the best DJ club mixer to come from Pioneer DJ in a long time.

Both will be able to stand their ground in any professional setting and depending on the success of the Prime Series in the pro DJ market, we might be witnessing the rise of a new club standard mixer here.

What are your thoughts on both mixers? Have you used them? Comment below!