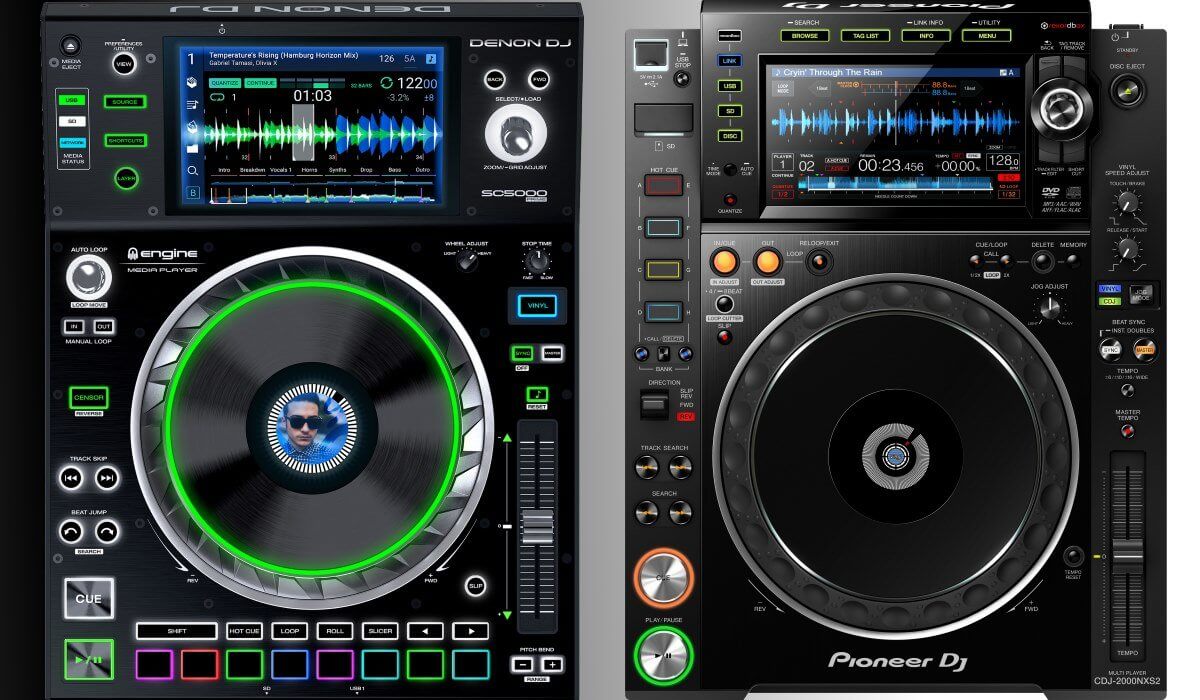 The Denon DJ’s Prime Series recently became available, and with that, it’s time to look a bit closer at both systems and see what the big differences are.

This won’t be doing a detailed review of the Prime Series gear, or of the NXS2 system. I hope to get my hands on both in the near future and be able to put both to test in the DjTechZone studio. The goal is to take a birdseye view on both and point out the (big) differences.

So let’s start by comparing the two players, the Denon DJ SC5000 Prime and the Pioneer DJ CDJ2000NXS2.

In next entries, we will look at the two mixers, the Pioneer DJ DJM-900NXS2 and the Denon DJ X1800 Prime.

First of all, please note that the SC5000 is a bit larger than the CDJ-2000NXS2 (not represented in the image above):

This means that cases made for the CDJ-2000NXS2 won’t accommodate the SC5000. This goes also for DJ booths that were customized to fit CDJ-2000NXS2’s. The good news is that they are exactly the same width.

The main reason for this size difference is the performance pads at the bottom of the SC5000, not present on the CDJ-2000NXS2.

The SC5000 Prime screen is a 7-inch full color, multi-touch gesture screen. That last bit means that it supports complex touch commands such as swiping and pinching. It’s something smartphone & tablet users have known and used for years, but new to the DJ gear world. What does this mean? It means swiping to load a track, increasing or decreasing the size of the waveform with a pinch gesture and touching elements on the screen to show or hide them. Simple, familiar and effective.

Still, there is rotary knob present to load and navigate tracks with if you prefer to use that.

The screen on the CDJ2000NXS2 is the same size but lacks the multi-touch gesture feature.

Does this mean it’s a less qualitative screen? Not really. It’s crisp, bright and full of all necessary information, and the CDJ-2000NX2 is full of physical commands that replace touch gestures, which are sometimes preferable to virtual controls, especially in difficult lighting situations (ever tried to DJ with the sun hitting the CDJ’s directly?). The big four buttons above the screen (BROWSE, TAG LIST, INFO, and MENU) are especially handy because they give instant access to key areas of the player.

Booth the CDJ-2000NXS2 as the SC5000 Prime have advanced filter & track searching possibilities.

The CDJ-2000NXS2 has an onboard keyboard to directly search for tracks from the screen, and the filter section allows to use the advanced possibilities of Rekordbox track management, such as filtering by Key, BPM, Rating, and Color. This is really handy and shows why tagging your tracks is important.

If you take the time to properly tag your tracks, you will be rewarded with a huge amount of filter features on the NXS2 that make finding the perfect track to play much easier than before.

The SC5000 Prime doesn’t lag behind. First of all, the screen being muli-gesture, it supports gestures we are all used from our daily use of smartphones and tablets, such as swiping. On the SC5000, loading a track is as easy as swiping the desired track to right. Swiping to the left puts the track into the preparation folder.

Besides that, there is also an integrated keyboard, and tracks can be filtered according to Genre, Album, Artist, and BPM.

In my opinion Engine Prime, the music management software integrated into the SC5000 Prime and available for PC and MAC is not at the same level as Rekordbox when it comes to ways to sort and organize music, but certainly, Denon DJ will improve it as time goes on.

The CDJ-2000XS2 has a fantastic jog wheel, including a mechanical tension knob adjust and a central LCD screen that shows track progression and needle position. The LED ring around the wheel gives it a classy touch. This is the classic jog wheel look and has been copied by many but improved by few (or even none).

The SC5000 Prime’s jog wheel design was obviously “inspired” by Pioneer DJ (this can be said of the entire player). But Denon Dj didn’t just copy paste here. The platter has all the qualities that the one on the NXS2 has, including tension adjust, and actually improves on the LCD screen in the center, giving it multiple functions: it can display track artwork, bpm, and even the artist’s artwork. This is very clever and above all useful, as it helps to quickly identify key parameters visually, such as which track is playing in which deck.

The CDJ-2000NXS2 has more performance features built-in than any CDJ before it. The most important ones are the 4 LED color-coded hot cue buttons, that control in total 2 banks of hot cues. The colors correspond to the hot cue colors set in Rekordbox and are a visual tool to “mark” hot cues according to their specific type (ex: red for vocal drops, blue for drums…)

Besides that, the 2000NXS2 has a very handy Slip Reverse/Forward/Reverse toggle switch, making it easy to combine Slip & Reverse in 1 single control.

The traditional loop functions are located above the jog wheel, including the loop cutter and the buttons to save & call loops. The CDJ-2000NX2 also has the Beat Jump feature, in 2, 4, 8 and 16 increments.

Lastly, you can connect the DDJ-SP1 and control up to 4 players with 1 unit.

The SC5000 Prime does it differently and chooses to implement 8 backlit performance pads at the bottom of the player. These work in much the same way as the ones found on most DJ controllers, and thanks to the multi-core internal processor, the player supports, through the pads not only Hot Cues and Loops but also Roll and Slicer! Note that Engine Prime not only supports color coding of hot cues, but you can even give them a custom name that appears on the screen.

Were the CDJ-2000NXS has track search buttons, the SC5000 has beat jump buttons, which makes more sense frankly.

The CDJ-2000NXS2 has pristine sound thanks to its 96 kHz/24-bit sound card. It also supports high-resolution audio: FLAC, Apple Lossless Audio (ALAC), as well as MP3, WAV, AAC, and AIFF.

Compared to the SC5000, the big limitation the CDJ-2000NXS2 has is its internal processing capabilities. While it’s probably the most powerful media player besides the SC5000 prime, it cannot analyze tracks on the fly as the SC5000 can. You are still very much required to put your tracks through Rekordbox and export them to USB if you want beat grids.

The CDJ-2000NXS2 supports USB storage, SD cards and traditional CD’s, for those that still use them.

The SC5000 Prime has, equally, a high-resolution 96 kHz/24-bit sound card on board. It supports high-resolution, lossless audio formats(FLAC, ALAC, WAV) as well. The SC5000 has 3 USB slots and one SD card slot, situated on the front of the player were the NXS2 has its CD slot.

What is unique about the SC5000 is its multi-core internal processor. It enables the SC5000 to actually run Denon Engine Prime and analyze tracks on the fly. Don’t expect that analysis to be instant, it does take a few seconds, but it means that if you have a memory stick with tracks that have never been touched by Engine Prime, you still can have them beat gridded on the fly.

The multi-core processor also enables the dual layer feature, allowing the SC5000 to play two tracks at the same time and switch the screen between them. The separate audio outputs on the back allow for each layer to have a separated channel in the mixer, turning a 2 player setup into a virtual 4 player rig.

The SC5000 has 2 sets of analog and digital outputs, to support both track layers. It also has 2 additional USB inputs for additional media.

The CDJ-2000NXS2 doesn’t have the additional layer thus the additional outputs on the back are missing. Also, there is only 1USB input, located next to the screen.

Purely looking at the features, the CDJ-2000NX2 should have a hard time to justify its higher price compared to the SC5000 Prime.

Besides the fact that the Pioneer unit has a CD player, the SC5000 outperforms or matches the NXS2 on most things. The dual layer feature, 3 USB ports, multi-core processor, multi-gesture touchscreen, performance pads, onboard track analysis… If you don’t need a CD player, is there any reason not to switch to Denon DJ?

Yes, there is. Actually, there are a few:

So while Denon DJ will definitely shake up the professional DJ gear market with their Prime series, it will probably take years to conquer a considerable part of it. Expect Pioneer DJ to react with a top of the line XDJ player at a comparable price point in the not too far future. That might then eat into their NXS2 profits, but then again, it’s better to lose CDJ customers to a top of the line XDJ unit than to the competition…

In the meantime, chime in below on your views on how the two players compare!