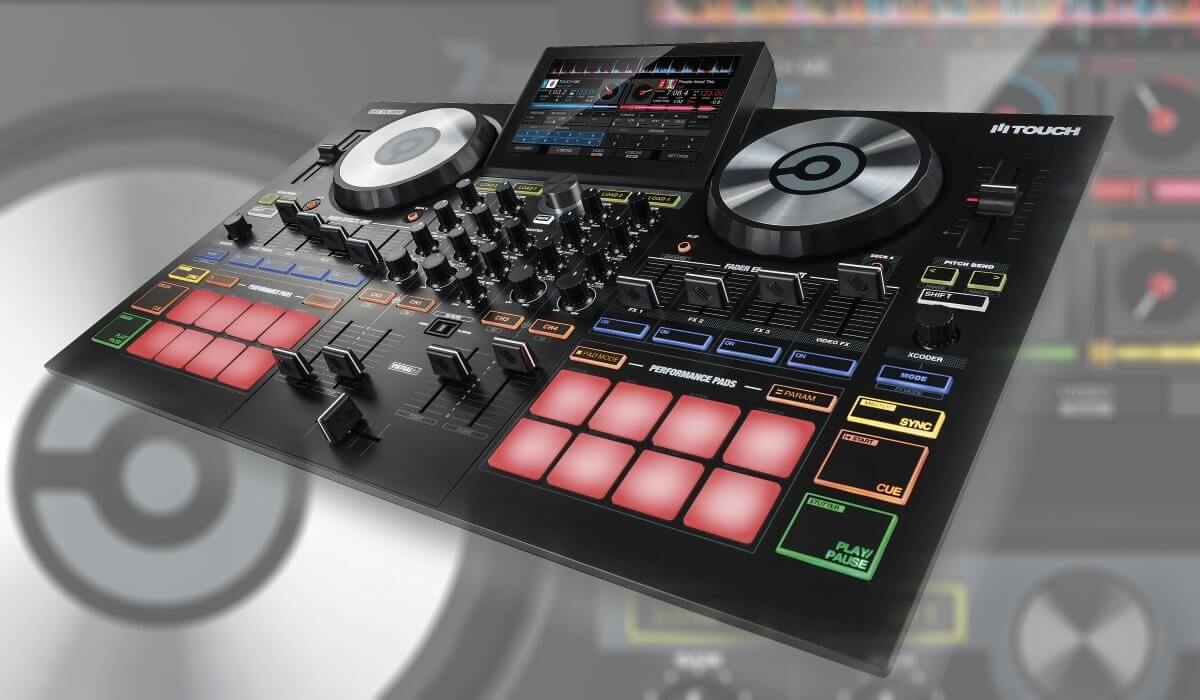 Reloop has been quite active as of late, with the release of a new turntable, the RP-4000 MK2 and the Mixon 4 released last year. The Reloop Touch is, by all accounts, different. Unlike most controllers released these days, that are usually build for Serato DJ or Rekordbox DJ, the Touch is built for Virtual DJ. Not only that, but it’s optimized to work with video, featuring a large, 7-inch full-color touch display.

Let’s get a few things out of the way first. The Touch is not cheap. It costs around USD 700, and that puts it in the same price range as the Numark NS6II, the Roland DJ-505, and the Pioneer DJ DDJ-SR2.

Secondly, the build quality is decent, but some parts feel really cheap, especially the crossfader. Now I won’t judge too harsh here since my review unit was clearly not new and probably had suffered quite a bit of abuse, but still, the crossfader didn’t feel like it belonged on a 700 dollar controller.

Thirdly, the installation procedure is a pain. The Touch requires multiple drivers to be installed in the right sequence to function, and if you don’t follow the instructions exactly as required, it simply won’t work. The installation includes a fresh and customized version of Virtual DJ, as the Touch needs this to work.

So yes, at first glance, there are a few issues to overcome. But, once you get over those, the Reloop Touch is really, really fun to use.

The jog wheels are smaller than you might expect on a 4 channel controller in this price range, and they are also placed high on the controller. The design reminds me a bit of the Traktor Kontrol S8 if the S8 would have jog wheels. Still, I like the jogs on the Touch, because they are solid and bulky.

The latency is also good so scratching shouldn’t be an issue. The pitch faders are located right next to the jog wheels and are adequately sized. There are LEDs indicating the center position which is always handy when beatmatching. There are also deck switch and slip buttons right under the jogs, which is a good placement.

Very specific to the Reloop Touch are the 4 faders per channel. These are both for video transitions/effects as for audio effects. Not only that, it’s also possible to manipulate effects directly on the screen, using an X/Y pad.

Using the X/Y pad on the screen is not as intuitive as it is on an iPad, as the precision of the touchscreen, is behind of that of any modern tablet or phone screen. Still, it’s a nice addition and usable enough to be fun.

Is there an advantage of having the fader to for effects versus regular knobs? For audio effects, not really in my opinion. If you factor in video effects, then this approach makes more sense, as using faders for video transition and effects feel more natural than knobs.

The XCoder on the Reloop Touch has a few interesting features. The 3 modes are:

I don’t mind having 1 knob fulfilling different functions, but it does require a bit of concentration to be aware of which mode the XCoder is in at any given time. On the bright side, it’s super easy to create cool build ups with this as you can, for example, set a loop, quickly move the key up and then reduce the loop size to create that exciting build-up effect.

The performance pads on the Reloop Touch are good, no quality issues there. They are large and responsive. The pads support different performance modes in virtual DJ: HOT CUE, ROLL, SLICER, SAMPLER, CUE LOOP, SAVED LOOP, BEAT JUMP, KEY CUE. Switching between these modes is done with the PAD MODE button. There is also a PARAM button that allows altering two parameters per mode using the upper row pads.

In my testing, I found that the mode indicated next to the pads didn’t always coincide with the actual pad mode in Virtual DJ. This is not a big problem though since the activated mode is also shown on the built-in screen, together with the variations per pad of each mode.

The screen is quite good, especially taking into account the price of the Reloop Touch. The interface is quite cluttered, and that makes it quite hard to hit the right things when playing. I imagine accuracy can be improved by calibration, but I honestly couldn’t figure out how to do that, as it needs to happen through the computer and it involves additional software.

That being said, the screen is bright and the display quality is good, and it will certainly help to keep you from staring at the laptop screen all the time. It’s particularly useful when using video, as there is a full-screen mode that shows the live video mix.

It’s possible to browse through your entire library, and there is even a qwerty keyboard to search your library, eliminating, even more, the need to go back to your laptop for track searching.

Despite the 4 available channels, the Reloop Touch doesn’t have a hardware mixer. I always find this slightly disappointing as being able to connect external media players or turntables and using them with DVS always ads to the flexibility of a DJ controller, especially for mobile DJ’s.

The filter knob also doubles as the low EQ knob, and there is a switch to change between 3 band EQ mode and filter mode. I’m not a big fan of this kind of arrangements, mainly because I like to use the filter in conjunction with the low-end EQ knob. So for me, it means giving up on a performance option. In this price range, I feel a 3 band EQ + independent filter knob should be standard. Then again, adding a third EQ knob would have created a cluttered layout because of the touchscreen, so I do get why Reloop went for this solution.

My biggest issue with the Touch is the crossfader. At least on my test unit, the crossfader was extremely flimsy and fragile and just didn’t have any tension to it at all. I have seen better crossfaders on DJ controllers that cost a fraction of the Reloop Touch. Again, this could be an isolated issue on my test unit, as test units go from reviewer to reviewer and can get damaged in the process.

Despite these issues, I did enjoy using the mixer. The line and effects faders felt OK and I didn’t have the same quality concerns as with the crossfader.

No surprises here. The Reloop Touch keeps things simple with on the front a double headphone jack and a microphone input and on the back the USB port, an RCA master output, and a TRS master output.

Although I have some (minor) issues with the Reloop Touch, I still believe it’s an interesting piece of kit, but it’s important to determine if this is the right DJ controller for you.

First of all, if you are already using Virtual DJ on a cheaper controller, and would like to move up without changing software package, the Touch should be on your shortlist. Most DJ controllers coming out now are supported by Virtual DJ, but the Touch is the only one, so far, build natively for Virtual DJ.

If on top of that, you are interested in Video Djing or already use video in your performances, the Reloop Touch becomes really interesting. Sure you could go for something like the Pioneer DJ DDJ-RZX as well but at USD 2.999 it’s an expensive alternative compared to the Reloop Touch’s USD 700.

The quality is a bit uneven here and there, as I pointed out the crossfader particularly left me a bit worried, but overall the Reloop Touch is sufficiently well built if you treat it with care. I would definitely recommend a flight case and dust cover to protect it.

The Reloop Touch’s biggest asset is the touchscreen and if that is an absolute must for you, then this is, apart from the Numark NV, the only way of having a DJ controller with screen(s) in this price range. If you don’t care so much about that, or if Virtual DJ is not necessarily your software of choice, then there are better alternatives out there. Check out our mid-range DJ controller guide right here for more on that!