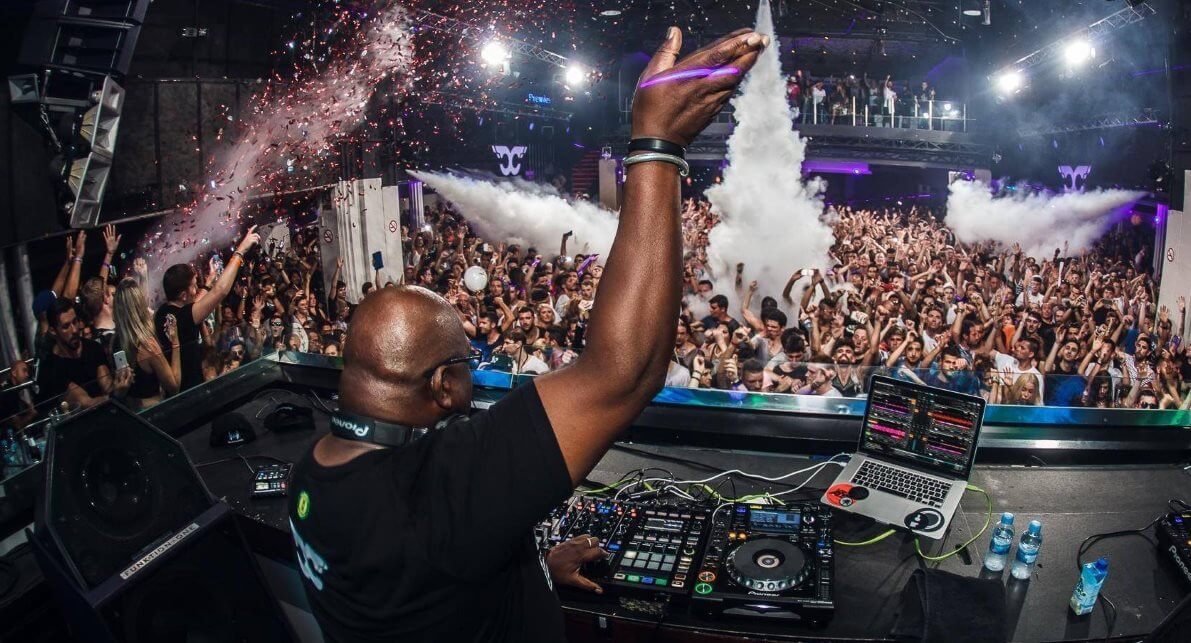 Understanding what gear top DJs use has been a longtime hobby of mine. In the minds of many DJ fans superstar DJs always use the same standard CDJ/DJM setup, but while this is true for many (not all) EDM DJs, there are also DJs that explore all technological possibilities available to them and mix and match equipment to fit their needs.

A great example of that versatility is DJ God Carl Cox. Cox has been known to rock three turntables back in the nineties and was famously called Carl “Three Decks” Cox for it.

For those of you that want to see him manually beat match on 3 turntables without skipping a beat, check out the following clip:

No sync, no autoloop, no fancy effects, only the basics, and Coxie didn’t need more to deliver a killer set.

In the late 2000’s Carl Cox went digital and adopted Traktor Scratch as his software of choice. There is an interesting clip where he goes through his digital setup, explaining how the digital revolution is here to stay and we better get used to it.

Granted, watching this in 2016 feels outdated, since Traktor gear has evolved so much since then, but for the time (it must have been around 2008) it was cutting edge:

Around the end of the decade, Carl Cox moved away from Traktor Scratch into a full Pioneer DJ setup. Here I’m speculating, but I guess it was around the time Rekordbox was launched. It would make sense that once it was possible to do beat gridding, cue setting and all that offline, push the tracks to USB and then use all of the metadata on CDJs without the need of a computer it made sense to him to abandon the laptop as a live setup element.

One of my absolute favorite online sets by Carl is his appearance on the DJsounds Show of 2011, using a CDJ-2000/DJM-2000 setup to perfection:

Fast forward to today. These days, Carl uses a hybrid setup consisting of a pair of CDJ2000NXS2’s and a Traktor S8. So yes, back to the old laptop 🙂

The return to Traktor is not surprising considering his familiarity with the software from his Traktor Scratch years, and the S8 built in screens must have contributed to his decision to change, as well as the possibilities to mix with Stems.

Check out a clip from Loveland in which his setup is well featured:

If you want to have full details on what Carl Cox has been using as his DJ setup over the years, check out his entry on equipboard.

DJs like Carl Cox prove a very important point: it absolutely doesn’t matter what gear you use, as long you manage to push your personal style and talent through. He went from using vinyl in an innovative way (not many DJs could beat match on 3 turntables as he could) to combine the latest technology with old school gear.

Proof? Watch his already epic and legendary 10-hour closing set at Space Ibiza, only a few weeks ago. Carl Cox combines CDJs, Turntables and his S8 in an amazing performance:

Hopefully, Carl will continue to rock dancefloors for years to come, always pushing the boundaries as he has always done!

What do you think of Carl Cox’s gear setup? Any other DJs and their gear you want me to look at? Comment below!

Do You Really Need Expensive DJ Gear To Be a Good DJ?