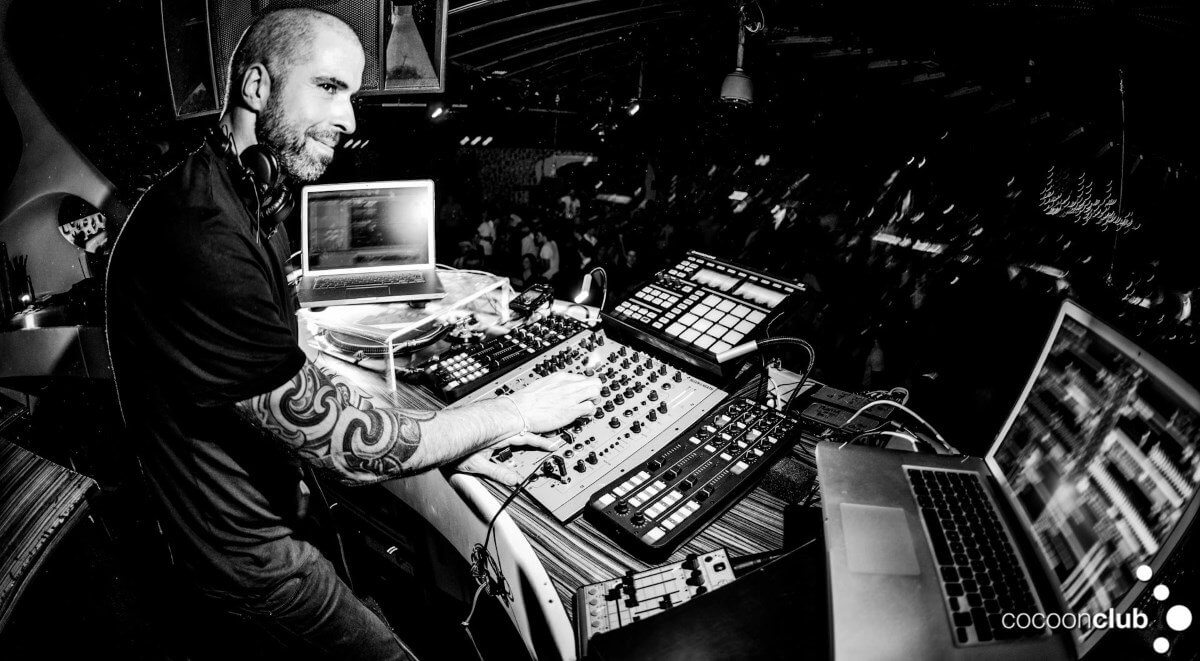 Chris Liebing is one of the key DJs in this scene, along with Richie Hawtin, Dubfire, Sven Väth and so many others.

As many of his fellow techno DJs, Liebing is a Traktor Pro adept and uses 4 decks to play live. Additionally, he uses Native Instrument’s Maschine to add extra sounds into the mix, such as drum loops and samples.

Djtechtools.com did an interview with him a few years ago giving good insights into how he plays live:

Sounds complicated? Let’s break it down below.

Liebing has a dual laptop setup. One Macbook is running Ableton Live, that controls Maschine and send the effects to the mixer.  The other laptop is running Traktor Pro, controlled by two Xone:K2 midi controllers, each one controlling two Traktor Pro decks. So that gives 4 channels of Traktor, plus whatever is coming out of Maschine & Ableton Live.

Let’s look more in detail at the individual parts.

The Native Instruments Maschine MK2 is a true powerhouse for the DJ/Producer, and Liebing uses it to its full effect in his live sets. Synced with Traktor Pro it is the ideal setup to trigger any kind of sounds. Liebing uses it to add different drum sounds such as claps, hi-hats, rides, toms to his performance.

Watch the video below not only to enjoy some top-notch German Techno but also to get a good view at the Maschine MK2 in action during a Chris Liebing set @ Spazio 900 earlier this year:

The Allen & Heath Xone:92 is a reference amongst (techno) DJs, and there are good reasons for it.

The sound quality, the very granular EQ possibilities (The Xone:92 has a 4 band EQ), extensive filters, midi capabilities, 6 channels and so many other features that allow for a very granular sound manipulation, which is an essential part of how DJs like Chris Liebing choose to play live.

The Faderfox Micromodul LC2 is small & compact midi controller. Liebing uses it in his setup to control the volumes of the Ableton Live setup with Machine. It’s made in Germany by Faderfox and they worth to check out if you are looking for a cool, compact or even custom-made boutique midi controllers. Note that this particular model is discontinued so you won’t be able to buy it new, but Faderfox has other models with similar features.

To control his Traktor decks Liebing uses two Allen & Heath Xone:K2’s, each controlling 2 Traktor Pro decks. The Xone:K2 is a sturdy, well made midi controller that can be mapped to just about any DJ software, but is very often used in conjunction with Traktor Pro.

Very similar, but a bit more flexible than the Native Instruments Kontrol X1, it is the ideal solution for DJs that want midi control combined with benefits of an analogue mixer, since the K2 can be set to the same height as most standard club controllers, and fits next to the mixer due to its compact size.

Concluding, Chris Liebing’s setup is a well thought out combination of various elements, and certainly the result of years of trial & error. As Liebing says in both videos in this post, it’s important to acquire profound knowledge of every element of your dj rig in order to get the most out of it.

Finally, check out below a more detailed presentation of Liebing’s setup at Leaf 2013, including a full demonstration on how he uses his gear.

What do you think of Chris Liebing’s setup? Did it inspire you to go for a similar setup? Comment below!