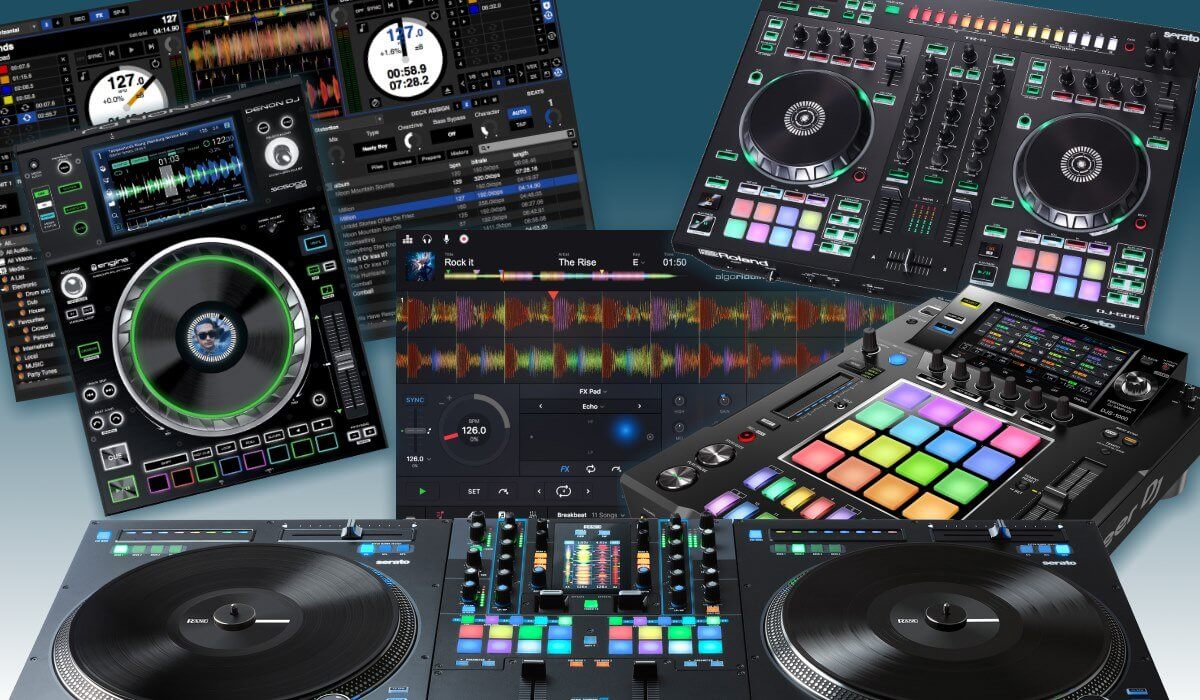 It was an awesome year for DJing, with so many new developments and gear coming out that it’s hard to keep up. The lines between DJ controllers and independent media players keep blurring, DJ software packages continue to evolve to become more intelligent, stable and friendly to use. On the other hand, traditional DJing with two turntables and a mixer is still alive and kicking, with vinyl record sales soaring.

Let’s have a look at the key developments in the DJ arena in 2017!

If you visit DjTechZone regularly, you are certainly a fan of DJ hardware. Below are the hardware releases that marked the year for me.

Undoubtedly the most important development this year is the continuous rise of Denon DJ as a major player in the professional DJ market. For a long, long time Pioneer DJ has been controlling the professional DJ market with their CDJ/DJM line of mixers and media players, but early this year, during NAMM 2017, Denon DJ unveiled their Prime Series, including the SC5000 Prime media player, the X1800 Prime mixer, and the V12 turntable.

Top DJ’s such as Paul Oakenfold, Laidback Luke, and Tiësto got behind Denon DJ and have been promoting the new gear since. The undisputed star of the pack is the SC5000 media player, equipped with a large, multitouch screen, 8 performance pads, and a multicore processor that can analyze tracks on the fly.

Pioneer DJ continues to work on their product roadmap. We didn’t see a direct answer to Denon DJ, but other product lines have been expanded seriously. For those that thought their Serato DJ controller series was dead with the arrival of Rekordbox DJ, think again. This year, we saw the arrival of the DDJ-SR2, the DDJ-SZ2 (okay that was late 2016), clearly not giving up on Serato DJ just yet.

Rekordbox got a major update with version 5.0, ironing out the issues in version 4 and delivering a more robust all-around music preparation/professional DJ software solution.

We got no less than 3 new mixers as well, the mid-level DJM-750MK2, the entry level DJM-250MK2 and the Serato DJ entry level battle mixer DJM-S3.

The XDJ-RX2 came in to replace the XDJ-RX, and while the changes might not seem apparent at first glance, there are a few interesting additions: an improved mixer, a touchscreen, 8 improved pads instead of 4 and better support for Rekordbox DJ. With the RX2, Pioneer DJ continues to blur the line between all-in-one media player and controller.

Finally, Pioneer DJ is clearly expanding their production gear range with the brand new DJS-1000 standalone sampler/sequencer, joining the Toriaz SP-16 and the Toraiz AS-1 line of professional sampling/sequencing gear. It will be interesting to see what the future brings on the production gear front for Pioneer DJ.

Roland is here to stay

With the release of the DJ-808 last year, Roland made a serious statement. The DJ-808 is not only a top-level Serato DJ controller with fantastic jog wheels, but it’s also a fully equipped sequencer and drum machine. This year, Roland expanded their DJ controller line with the entry-level DJ-202 and the mid-level DJ-505. I really wonder what is next, could we see premium DJ controller (with screens maybe?) above the DJ-808 next year? Or maybe something more modular that can be used in a hybrid DVS setup? I can’t wait to find out!

Rane, now under InMusic wings, got everyone excited with the unveiling of the Rane Seventy Two battle mixer and the Rane Twelve turntable controller. Both haven’t been released yet (word on the street is that issues with the brand new Serato DJ Pro is causing the delay) but we expect to see them working at Namm 2017. With this setup, Rane firmly aims to grab to crown in Battle gear land, and clearly challenges Pioneer DJ’s DJM-S9.

With the Touch DJ controller, Reloop introduces the first Virtual DJ controller with built-in screens. And not only that, the controller has a very particular design as well, with two small jog wheels placed relatively high on the faceplate and with 4 faders per channel to control video and audio effects.

Apart from this release from Reloop, we haven’t seen any other new DJ controllers with built-in screens being released this year. We are still waiting for Pioneer DJ to bring out an affordable DDJ controller with screens as the current RZX is anything but that at USD 3000.

The battle of the DJ software packages

Rekordbox (with Rekordbox DJ) and Serato DJ are clearly competing for your attention, and both packages release updates and improvements constantly.

Serato DJ upgraded their Sampler, integrated with Ableton Link and added a host of new gear to their supported list amongst many, many other things. Rekordbox made the leap to version 5.0 with a new architecture and design, and with a vast line of dedicated controllers from Pioneer DJ, it’s destined to grow its market share.

In the meanwhile, Traktor Pro, while still considered a top of the line DJ software package, has only marginally evolved and many are asking what the future, if any, there is for it. Native Instruments hasn’t released a new DJ controller for Traktor Pro in years, so unless something big is about to happen in 2018, we doubt Traktor Pro will be around for years to come.

Algoriddim’s djay Pro made serious progress this year, releasing versions for Window 10 and recently a new version for Mac with a lot of cool updates: Automix now comes with Artificial Intelligence assistance, which should improve the quality of automatic mixes, a sleeker interface, high-resolution waveforms, and more. They seem determined to put djay Pro on the same level as Serato DJ and Rekordbox DJ but to do that DVS support will be essential. Maybe for 2018?

Virtual DJ 8 should be mentioned here as well, as they continuously support new DJ controllers and keep improving their platform. I wish they would work more on the interface since that is really getting dated.

In a world that that audio streaming is killing downloads at a steady pace, and Apple ready to phase out downloads on their iTunes platform as early as beginning 2019, it’s surprising to see that DJ applications haven’t truly embraced in-app streaming. Even more, the once so promising Pulselocker service simply stopped working in Serato DJ and Rekordbox DJ from one day to another, leaving their users in the cold.

If you want to stream audio through your DJ application today, your only options are djay Pro using Spotify and Virtual DJ using iDJPool.

This will change for sure in the coming year, as Apple Music kills downloads and expectedly allows DJ applications to use Apple Music and Spotify closes deals with the likes of Serato and Pioneer DJ to allow streaming of tracks in their DJ software packages.

Overall, 2017 was a great year for DJing, and if you are getting into DJing or you are a seasoned professional DJ, your choices of gear and software have seriously expanded, and will continue to do so as technologies like Artificial Intelligence, multitouch high-resolution screens, and advanced multicore processors are integrated into anything from mixers to DJ media players. Enjoy the holidays and have a great New Year!